America is not unfamiliar with low temperatures, but the present cold snap is exceptional by any standards 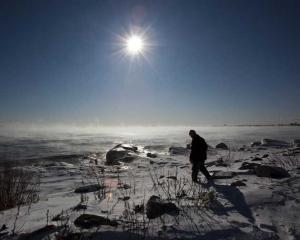 Alabama was colder than Alaska, water fountains froze into ice sculptures in South Carolina, and Florida shivered through an Arctic air blast as the coldest week of the winter continued to grip large parts of the US.

The Northeast in particular suffered from the bitterly cold air from Canada that sent temperatures plunging in some places below minus 34C (minus 30F) and left even hardy veterans of such weather reluctant to venture outdoors.

It brought to an end a week which will be remembered for some time in Chicago. The city has now suffered the most consecutive days of snow since records began in 1884 and, on Friday, the wind chill took the temperature to minus 40C.

The cold claimed at least six lives and contributed to dozens of traffic accidents.

One death involved a man in a wheelchair who was found in sub-zero temperatures stuck in the snow, a shovel in his hand, outside his home in Des Moines, Iowa.

Temperatures of minus 12C to minus 18C and sub-zero wind chills were expected in western New York through the weekend, with more seasonable conditions moving in early next week.

To Southerners, who rarely see temperatures so cold, the icebox-like weather was the most jarring.

Construction worker Allen Johnson wore a grey cap, flannel shirt, long johns and boots as he stopped for coffee in Montgomery, Alabama, after an overnight low of minus 6C on Friday. “No matter how bad it is, it could be worse – we could be in Anchorage, Alaska,” Johnson said. Actually, the temperature was about 6C warmer in Anchorage on Friday.