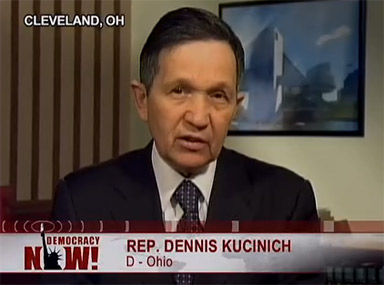 Congressman Kucinich: America arming Israel with weapons that are used against Palestinian civilians.

PACIFICA – Israel must take the responsibility for its attacks on Palestinian civilians in Gaza, said Congress member Dennis Kucinich of Ohio, during an interview with Democracy Now! on Monday.

“When you look at what the targets of the attacks have been, you know, the Israeli army is given a lot of credit for its precision, so when UN schools are hit, the American university there, when you look at the damage or destruction of the Red Cross’s efforts there, you have to come to an understanding that this is deliberate. This isn’t accidental. Accidents can happen in war, but when you’re using that kind of destructive power, you have to take the responsibility for the consequences of it,” said Congressman Kucinich.

“There’s no question there’s a use of disproportionate force here, and no amount of reasoning or attempt to try to take the side of Israel is going to remove that single fact,” he added.

“Just look at the numbers. Look at the destruction. I mean, believe what you see with your eyes. And that’s, I suppose, one of the reasons why the Israeli government doesn’t want the media to get in there. When you tell civilians to go to a house to be protected, and then you shell that house, I mean, what does that say?” Asked the Congressman.

Congressman Kucinich said the US must make sure that its military aid to Israel will not continue to be used against the civilian population in Gaza.

“Not only F-16 jets, Apache helicopters, but now we’re seeing white phosphorus used against the people in Gaza. This should be a great concern to every person in this country, because of the amount of money that we’re giving to Israel,” said the US Congressman.

Such use is even in violations of the US conditions.

“In 1976, Congress passed a law that says that if the United States is going to give arms to another country, that it can attach and does attach conditions that says that those arms are transmitted under the condition, first of all, that they’re used for defensive purposes only, and second, that they not be used to escalate a preexisting conflict. On both of those cases, I think that Israel has failed,” noted Congressman Kucinich.

But Israel seems to be encouraged by Washington.

The US Congressman also addressed the root cause of the conflict – Israel’s occupation of the Palestinian territories.

“You have to go back to the blockade and the occupation, and you have to look at Israel’s conduct in the West Bank, as well. I mean, if Israel was so gentle with the people of Gaza, you look at the West Bank and look at what’s happened there,” he explained.

But – outside the US – Israel has failed justify its violence.

“The whole world is watching this, and the world understands what’s happening. You know, no amount of attempt to rationalize this violence in Gaza is going to work for Israel,” he said.

On the timing of the Israeli assault, Congressman Kucinich said: “Israel has a lot of talent, very bright people running their government. They chose to use violence. They chose it on the eve of a presidential inauguration in the United States. They’re trying to take advantage of this situation, because they know the Bush administration couldn’t care less about international law.”

On Thursday, the Senate passed the resolution by a unanimous voice vote. The House voted on a similar bill Friday.

The measure passed by a vote of 390 for, five against, twenty-two representatives voting “present.”

Democratic Congress member Dennis Kucinich of Ohio is one of the five members of the House to vote against the resolution.