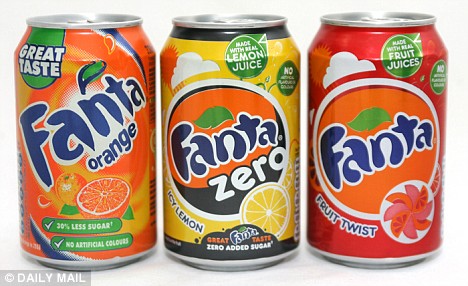 Fizzy drinks sold by Coca-Cola in Britain have been found to contain pesticides at up to 300 times the level allowed in tap or bottled water.

A worldwide study found pesticide levels in orange and lemon drinks sold under the Fanta brand, which is popular with children, were at their highest in the UK.

The research team called on the Government, the industry and the company to act to remove the chemicals and called for new safety standards to regulate the soft drinks market.

The industry denies children are at risk and insists that the levels found by researchers based at the University of Jaen in southern Spain are not harmful.

The researchers tested 102 cans and bottles of soft drinks, bought from 15 countries, for the presence of 100 pesticides. The UK products were bought in London, Cambridge, Edinburgh, St Andrews and at Gatwick Airport.

The experts said the levels found were low under the maximum residue levels allowed for fruit, but they were ‘very high’ and ‘up to 300 times’ the figure permitted for bottled or tap water.

The chemicals detected included carbendazim, thiabendazole, imazalil, prochloraz, malathion and iprodione. They are mainly applied to fruit after harvest to stop it developing fungal infections and rotting.

A total of 19 products were bought in the UK, all made by Coca-Cola.

Two orange drinks bought in the UK contained imazalil at 300 times the limit permitted for a single pesticide in drinking water.

The average level of the total pesticide contamination of the British drinks was 17.4 parts per billion  –  34.6 times the EU maximum residue level for water.

Coca-Cola GB insisted the products are safe. A spokesman said: ‘All of the drinks tested meet the safety regulations relating to food products made from agricultural ingredients, which include drinks with fruit juice as an ingredient.

‘The generally miniscule levels that were detected were well within the acceptable daily intake levels and these findings should reassure consumers there is no safety issue here.’