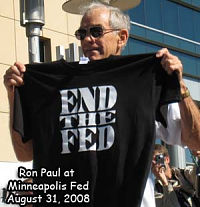 As the printing presses for the bailouts run at full speed, those in power are no longer even pretending that the new giveaways will fix our problems. Now that we are used to rewarding failure with taxpayer-funded bailouts, we are being told that this is “just a start,” more funds will inevitably be needed for more industries, and that things would be much worse had we done nothing.

The updated total bailout commitments add up to over $8 trillion now. This translates into a monetary base increase of 75 percent over the last two months. This money does not come from some rainy day fund tucked away in the budget somewhere – it is created from thin air, and devalues every dollar in circulation. Dumping money on an economy, as they have been doing, is not the same as dumping wealth. In fact, it has quite the opposite effect.

One key attribute that gives money value is scarcity. If something that is used as money becomes too plentiful, it loses value. That is how inflation and hyperinflation happens. Giving a central bank the power to create fiat money out of thin air creates the tremendous risk of eventual hyperinflation. Most of the founding fathers did not want a central bank. Having just experienced the hyperinflation of the Continental dollar, they understood the power and the temptations inherent in that type of system. It gives one entity far too much power to control and destabilize the economy.

Our central bankers have had a tremendous amount of hubris over the years, believing that they could actually manage a paper money system in such a way as to replicate the behavior and benefits of a gold standard. In fact, back in 2004 then Fed Chairman Alan Greenspan told me as much. People talk about toxic assets, but the real toxicity in our economy comes from the neo-alchemy practiced by the Federal Reserve System. Just as alchemists of the past frequently poisoned themselves with the lead or mercury they were trying to turn to gold, today’s bankers are poisoning the economy with accelerated fiat money creation.

Throughout the ages, gold has stood the test of time as a consistently reliable medium of exchange, and has frequently been referred to as “God’s money”, as only God can make more of it. Seeking superhuman power over money in the way alchemists did in ancient times caused society to shun them as charlatans. In much the same way, free people today should be sending the message that this power and control over our money is no longer acceptable.

The irony is that even had the ancient practice of alchemy been successful, and gold was suddenly, magically made abundant, alchemists still would have failed to create real wealth. Creating gold from lead would have cheapened its status to that of rhinestones or cubic zirconia. It is unnatural and dangerous for paper to be considered as precious as a precious metal. Our fiat currency system is crumbling and coming to an end, as all fiat currencies eventually do.

Congress should reject the central bank as a failure for its manipulations of money that have brought our economy to its knees. I am hoping that in the 111th Congress my legislation to abolish the Federal Reserve System gains traction so that the central bank can no longer destroy our money.