WASHINGTON – President Bush agreed to an emergency bailout of General Motors and Chrysler, giving them a few months to get their businesses in order, but left to President-elect Barack Obama the difficult political decision of ruling on their progress. 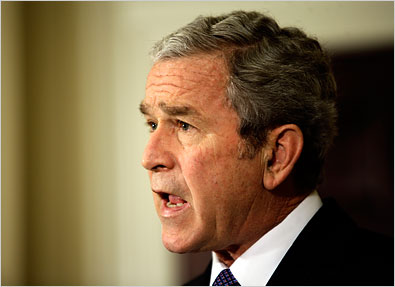 The plan pumps $13.4 billion by mid-January into the companies from the fund that Congress authorized to rescue the financial industry. But the two companies have until March 31 to produce a plan for long-term profitability, including concessions from unions, creditors, suppliers and dealers.

The bailout plan sets “targets” rather than concrete requirements about what those concessions may be, meaning that Mr. Obama and his advisers have enormous latitude to decide how to define long-term viability.

While Mr. Obama has broadly insisted that the auto makers radically increase the fuel efficiency of their fleets, reduce carbon emissions and save the maximum number of jobs possible, he will have just nine weeks after taking office to press for a detailed transformation of an industry whose problems have been building for three decades.

At a news conference in Chicago, Mr. Obama embraced the plan but said he had not had enough time to study the details. He never addressed the question of how he would turn a program designed as a short-term bridge loan into a long-term restructuring.

“I do want to emphasize to the Big Three automakers and their executives that the American people’s patience is running out, and that they should seize on this opportunity over the next several weeks and months to come up with a plan that is sustainable. And that means that they’re going to have to make some hard choices.”

He said it was his intention to preserve jobs “for years to come” and that he wanted to make sure “that it’s not just workers who are bearing the brunt of that restructure, that they’re not the ones who are taking all the hits.”

Yet as the economy falters and joblessness balloons, Mr. Obama will be under extreme political pressure not to be too tough on the industry.

Already, Ron Gettelfinger, the president of the United Automobile Workers union, said he was “pleased” that the administration acted on the loan requests, but said the President added “unfair conditions” that singled out blue-collar workers.

Mr. Gettelfinger said the union expects to appeal to Mr. Obama to alter the expectations for wage and benefit cuts. According to Treasury Department officials who drafted the wording, Mr. Obama would be free to change the requirements and loosen the standards, especially on how much workers will have to give up.

Mr. Bush announced the plan early Friday, before markets opened, and took no questions about its details. The day before, he conceded that he had been forced by the severity of the economic downturn to ignore many of the free-market principles he came to office embracing.

G.M. said it expects to draw on the first installment of its loans by Dec. 29. Soon after it pays suppliers and workers, the troubled automaker will begin implementing drastic downsizing plans, outlined to Congress earlier this month, that includes eliminating more than 30,000 jobs, shutting factories, shedding dealerships and determining the future of its Saab, Saturn and Pontiac brands.

In Detroit, a visibly relieved Rick Wagoner, G.M.’s chairman, told reporters that the loans will allow the automakers to pay their bills and prevent a financial crisis from spreading through the industry’s suppliers and dealers.

Mr. Wagoner, who has served as G.M.’s chief executive for eight years, added that he had no plans to step aside during the automaker’s difficult months ahead. “Do you think I would have gone through what I’ve gone through in the past two months, if I didn’t want to stay?”

His reaction was echoed at Chrysler. “We intend to be accountable for this loan, including meeting the specific requirements set forth by the government, and will continue to implement our plan for long-term viability,” Chrysler’s chairman, Robert Nardelli, said in an e-mail to employees.

Even before the March 31 deadline, it might fall to the Obama administration to persuade Congress to release the second $350 billion of the Treasury’s huge financial system stabilization program – a request that the Bush administration is reluctant to make because it will face angry criticism by lawmakers.

Without the release of those funds, $4 billion in additional loans for G.M. could not be made available in February.

Beyond the initial hurdles to provide all of the money, it will be left to the new president to make the tough judgments needed about the future of the industry. Are enough jobs being cut and factories being closed? Have the right product lines been consolidated? Are all of the stakeholders sufficiently on the same page to make the long-term viability plans workable? And how should financial viability be defined, anyway?

On paper, Mr. Obama will inherit a club to wield against the automakers and the unions: He can threaten to “call” the loans and require repayment in 30 days.