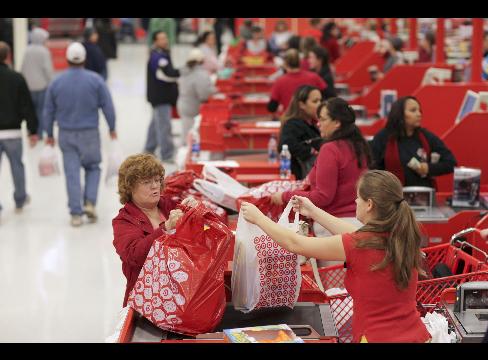 A customer gathers her purchases after checking-out inside a Super Target store in Thornton, Colorado, Nov. 28, 2008. Photographer: Matthew Staver/Bloomberg News

Dec. 10 (Bloomberg) — The biggest slump in U.S. consumer spending since 1942 will extend the recession and push the jobless rate to the highest level in a quarter century, according to economists surveyed by Bloomberg News.

Household spending will drop 1 percent in 2009, the biggest decline since after the attack on Pearl Harbor, according to the median estimate of 51 economists surveyed Dec. 4 through Dec. 9. By the middle of next year, the economy will have shrunk for a record four consecutive quarters, the survey showed.

“That sounds scary enough to me,” said Jeffrey Frankel, an economics professor at Harvard University and a member of the group that determined the start of the recession. “Consumers have carried the weight of expanding demand for a long time at the expense of a serious deterioration of their balance sheets.”

A drop in spending has brought the auto industry to the brink of collapse, and mounting unemployment, a lack of credit, and falling property and stock values will prompt Americans to turn even more frugal.

President-elect Barack Obama has pledged to pursue the biggest public-works plan since the 1950s to stem the already year-old economic slump.

“It’s a serious recession, and there’s a good chance it will break the 16-month record since the Depression,” said James O’Sullivan, a senior economist at UBS Securities LLC in Stamford, Connecticut. “We’re at the stage where the weakness is feeding on itself. The next few months look pretty rough.”

The National Bureau of Economic Research last week announced the U.S. contraction began in December 2007. The longest economic slumps since 1945 were the 16-month downturns that ended in March 1975 and November 1982. The Great Depression lasted 43 months, from August 1929 to March 1933.

A report from the Commerce Department today showed wholesale inventories fell 1.1 percent in October, the most in seven years, as a record 4.1 percent drop in sales caused companies to scale back.

Economists in the survey cut fourth-quarter forecasts for gross domestic product by more than a percentage point from last month, predicting the economy will shrink at a 4.3 percent annual rate, the biggest plunge since 1982.

The world’s largest economy will contract at a 2.4 percent pace in the first three months of 2009 and at a 0.5 percent rate the following quarter, the survey showed. Combined with the 0.5 percent drop in this year’s third quarter, it would be the longest slide since quarterly records began in 1947.

Consumer purchases, the biggest part of the economy, may drop at a 4 percent rate this quarter, the survey showed. Following the 3.7 percent slump from July through September, it would be the first time on record that spending declined in excess of 3 percent in consecutive quarters.

The spending slump will continue into the first half of 2009, according to economists.

The drop in sales will prompt employers to keep cutting staff, sending the unemployment rate to 8.2 percent by the end of next year, a 25-year high, the survey showed.

Investors concerned about the worst financial crisis in at least 70 years have rushed to the safety of U.S. government debt, causing three-month Treasury bills to trade yesterday at negative rates for the first time. Treasuries fell today, snapping the rally, on concern the need to fund the financial rescue plans will flood the market with debt.

Economists project the Federal Reserve will cut the benchmark rate target to 0.5 percent when they meet in Washington next week and hold it there for all of 2009, the survey showed.

“The Fed is moving aggressively and will continue to do more,” UBS’ O’Sullivan said. Stimulus measures from the central bank and the government are “absolutely needed,” he said.

Automakers are among those seeking help. Congress may vote as early as today on a $15 billion plan Democrats reached with the Bush administration to keep automakers afloat that includes proposals to restructure the industry. General Motors Corp. and Chrysler LLC say they need aid to survive.

Retailers also are concerned about the November-December holiday season, which brings in one-third or more of annual revenue and is predicted to be the worst in years.

“The big problem is that there’s no bottom in sight for consumers and for businesses,” said John Lonski, chief economist at Moody’s Capital Markets Group in New York. “The negative sentiment makes it difficult to stabilize the situation. It’s very worrisome.”

Businesses are pulling back as Americans retrench. Dow Chemical Co., the largest U.S. chemical maker, this week said it will cut 5,000 jobs, permanently shut 20 facilities, temporarily idle 180 plants and reduce the company’s contractor workforce by about 6,000.

“The entire industrial supply chain all the way to whatever the consumer buys outside of food and health is in a recessionary mode,” Chief Executive Officer Andrew Liveris said on a conference call. “Across the board, everywhere.”

The downturn will help contain inflation, the survey showed. Consumer prices will rise 1.6 percent this year and next, the smallest back-to-back gain since 1964-65, according to the median.

It’s “a recession with adjectives,” Martin Feldstein, a member of the NBER group that announced the downturn, said in a Bloomberg Television interview yesterday. “A deep recession, a long recession, a damaging recession.”