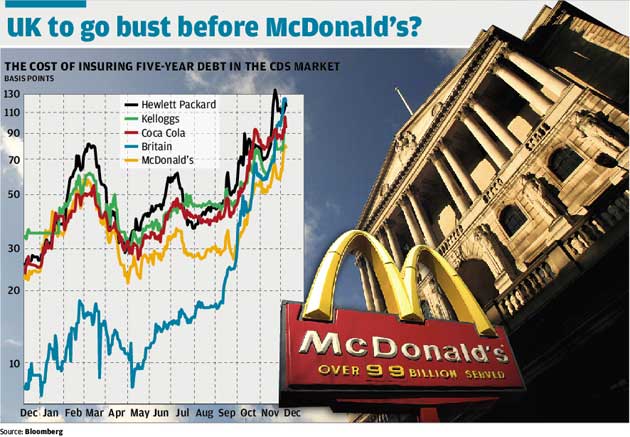 Britain has become a worse credit risk than McDonald’s and a host of other large companies, figures produced for The Independent reveal.

The collapse in Britain’s credit rating has taken place over the past two and a half months, since the Government underwrote the banking system and decided to spend its way out of recession. Investing in UK government debt is now almost twice as risky as buying McDonald’s corporate bonds, according to the market in credit default swaps (CDS), which provides insurance for the buyers of such debt.

The government debt of large economies such as the UK would normally be considered far more secure than corporate bonds. However, on 29 September, the cost of buying insurance against default on UK five-year government debt became more expensive than the equivalent cover for the US burger chain and has since overtaken Kellogg’s and Coca-Cola, according to data from Bloomberg.

The cost of insuring British debt soared on that day, as the Government nationalised Bradford & Bingley, increasing fears that the state would have to bail out the banking system.

The cost of insuring against default on the Government’s bonds spiked again in mid-October after the Government announced its unprecedented bailout of the banking system, which has already seen Royal Bank of Scotland become part-nationalised.

The extraordinary movements in the CDS market also reflect market concerns about the highly leveraged British economy, which is sliding into a recession that the International Monetary Fund has predicted may be worse than the slowdown in the US.

The CDS market has proved controversial as the financial crisis has unfolded because it has raised alarm bells about the financial strength of companies, but at the same time it is opaque and illiquid and has become a means for speculators to bet against companies. Investors also use CDS to hedge against other risks such as share prices, meaning prices can reflect other factors than the underlying risk of the debt insured.

But analysts said the dramatic change in the risk rating of the UK’s debt still represents a major swing in investor sentiment towards the British economy. The cost of insuring against German default on equivalent terms is below the UK at £51,000, with France costing £61,000. Britain is deemed to be safer than Italy, at £191,000, and Russia, whose CDSs cost £784,000.

Sean Corrigan, the chief investment strategist at Diapason Commodities Management in Switzerland, said: “For the UK to have this default rating is in some ways ludicrous but the market is using these instruments to express a view about the relative standing of certain countries. This has taken off as the domestic financial situation has got worse and the steps taken by the fiscal and monetary authorities have become more irresponsible.”

The Bank of England has made an about-turn since September by slashing interest rates three times to 2 per cent, the lowest since 1951, with markets speculating that rates could hit zero as the authorities try to support the economy and ward off deflation. Last month the Chancellor announced that the Government would bring forward spending and cut short-term taxes in a bid to prevent a long, deep recession.

The cash market for debt paints a different picture, with the UK deemed a safer bet than McDonald’s and other companies. Analysts said that should in theory attract investors to “arbitrage” the difference between the two markets by betting on the UK in the CDS market. “It looks daft, it is daft, but that is where the buyers and sellers are and the way business is getting done in the CDS market,” one analyst said.