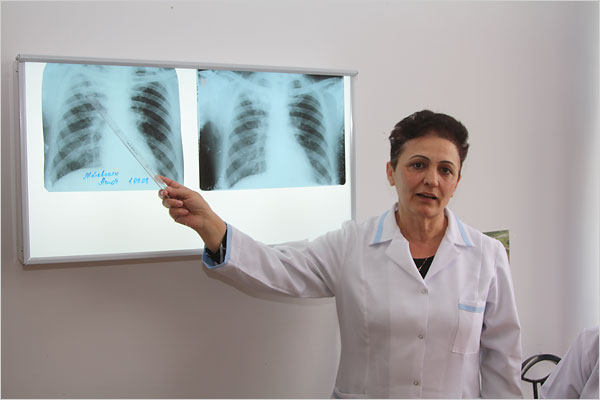 Garik Hakobyan, 34, an artist, carries an ailment, XDR-TB, an incurable form of tuberculosis.

As if you didn’t have enough to worry about … consider the deadly, infectious and highly portable disease sitting in the lungs of a charming young man here, Garik Hakobyan. In effect, he’s a time bomb.

Mr. Hakobyan, 34, an artist, carries an ailment that stars in the nightmares of public health experts – XDR-TB, the scariest form of tuberculosis. It doesn’t respond to conventional treatments and is often incurable.

XDR-TB could spread to your neighborhood because it isn’t being aggressively addressed now, before it rages out of control. It’s being nurtured by global complacency.

When doctors here in Armenia said they would introduce me to XDR patients, I figured we would all be swathed in protective clothing and chat in muffled voices in a secure ward of a hospital. Instead, they simply led me outside to a public park, where Mr. Hakobyan sat on a bench with me.

“It’s pretty safe outside, because his coughs are dispersed,” one doctor explained, “but you wouldn’t want to be in a room or vehicle with him.” Then I asked Mr. Hakobyan how he had gotten to the park.

He saw my look and added: “I have to take buses. I don’t have my own Lincoln Continental.” To his great credit, Mr. Hakobyan is trying to minimize his contact with others and doesn’t date, but he inevitably ends up mixing with people.

Afterward, I asked one of his doctors if Mr. Hakobyan could have spread his lethal infection to other bus passengers. “Yes,” she said thoughtfully. “There was one study that found that a single TB patient can infect 14 other people in the course of a single bus ride.”

Americans don’t think much about TB, just as we didn’t think much of AIDS in the 1980s. But drug-resistant TB is spreading – half a million cases a year already – and in a world connected by jet planes and constant flows of migrants and tourists, the risk is that our myopia will catch up with us.

Barack Obama’s administration should ensure it isn’t complacent about TB in the way that Ronald Reagan was about AIDS. Reagan didn’t let the word AIDS pass his lips publicly until he was into his second term, and this inattention allowed the disease to spread far more than necessary. That’s not a mistake the Obama administration should make with tuberculosis.

One-third of the world’s population is infected with TB, and some 1.5 million people die annually of it. That’s more than die of malaria or any infectious disease save AIDS.

“TB is a huge problem,” said Tadataka Yamada, president of global health programs for the Bill and Melinda Gates Foundation. “It’s a problem that in some ways has been suppressed. We often don’t talk about it.”

Ineffective treatment has led to multi-drug resistant forms, or MDR-TB. Scarier still is XDR-TB, which stands for extensively drug resistant TB. That is what Mr. Hakobyan has. There were only 83 cases of XDR-TB reported in the United States from 1993 to 2007, but it could strike with a vengeance.

“We always think we live in a protected world because of modern medicines and the like,” Dr. Yamada said. “But if we get a big problem with XDR, we could be in a situation like we had in the 19th century when we didn’t have good treatments.”

If we were facing an equivalent military threat capable of killing untold numbers of Americans, there might be presidential commissions and tens of billions of dollars in appropriations, not to mention magazine cover stories. But with public health threats, we all drop the ball.

Because of this complacency about TB, there hasn’t been enough investment in treatments and diagnostics, although some new medication is on the horizon.

“Amazingly, the most widely used TB diagnostic is a 19th-century one, and it’s as lousy as you might imagine,” said Dr. Paul Farmer, the Harvard public health expert whose Partners in Health organization was among the first to call attention to the dangers of drug-resistant TB.

In Armenia, the only program for drug-resistant TB, overseen by Doctors Without Borders, can accept only 15 percent of the patients who need it. And the drugs often are unable to help them.

“After two years of treatment with toxic drugs, less than half of such chronic TB patients are cured, and that’s very demoralizing,” noted Stobdan Kalon, the medical coordinator for Doctors Without Borders here. And anyone who thinks that drug-resistant TB will stay in places like Armenia is in denial. If it isn’t defused, Mr. Hakobyan’s XDR time bomb could send shrapnel flying into your neighborhood.