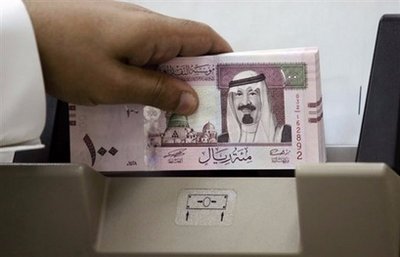 One hundred riyal notes at a bank in Riyadh, the Saudi Arabian capital. The US has asked four oil-rich Gulf states for close to US$300 billion to help it curb the global financial meltdown, Kuwait’s daily Al-Seyassah has reported.
(AFP/File/Hassan Ammar)

Al-Seyassah said Washington sought the amount as “financial aid” to face the fallout of the financial crisis and help prevent its economy from sliding into a painful recession.

The daily said the United States plans to use the funds to help the ailing automobile industry , banks and other companies suffering from the global financial turmoil.

The four nations, all members of OPEC, produce together 14 million barrels of oil per day, around half of the cartel’s production and about 17 percent of world supplies.

The four states are estimated to have amassed close to 1.5 trillion dollars in surplus in the past six years due to high oil prices that rocketed above 147 dollars in July before sliding to just above 50 dollars.

The daily also said that the United States has asked Kuwait to forgive its Iraqi debt estimated at around 16 billion dollars.