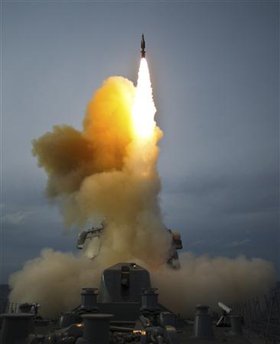 WASHINGTON (Reuters) – A Japanese warship failed to shoot down a ballistic missile target in a joint test with U.S. forces Wednesday because of a glitch in the final stage of an interceptor made by Raytheon Co, a U.S. military official said.

“This was a failure,” he said in a teleconference with reporters. It brought the tally of Aegis intercepts to 16 in 20 tries.

The problem “hopefully was related just to a single interceptor,” not to a systemic issue with the Standard Missile-3 Block 1A, the same missile used in February to blow apart a crippled U.S. spy satellite, Hicks said.

Military officials from both countries said in a joint statement there was no immediate explanation for the botched intercept of a medium-range missile mimicking a potential North Korean threat. The test was paid for by Japan, Hicks said.

John Patterson, a spokesman at Raytheon Missile Systems in Tucson, Arizona, said the company would not comment pending the results of an engineering analysis of what may have gone wrong.

The test involved the Chokai, the second Japanese Kongo-class ship to be outfitted by the United States for missile defense, and a dummy missile fired from a range on the Hawaiian island of Kauai.

North Korea’s test-firing of a ballistic missile over Japan in August 1998 spurred Tokyo to become the most active U.S. ally in building a layered shield against missiles that could be tipped with chemical, biological or nuclear warheads.

A Japanese defense official said he thought Japan would continue with its missile defense plans.

“I don’t think there will be any effect on the construction schedule Japan is planning,” he added.

The drill off Kauai featured the ship-borne Aegis ballistic missile defense system made by Lockheed Martin Corp, which apparently worked without a hitch.

The operation of the Aegis system by the Chokai’s crew and the missile’s “flyout” toward the target were successful even though the intercept was not achieved, said Rear Adm. Tomohisa Takei, operations and plans director for the Japanese Maritime Self Defense Force, and U.S. Air Force Lt. Gen. Henry Obering, head of the Pentagon’s Missile Defense Agency.

More information will be available after a thorough investigation, they said in the statement.

The U.S. Missile Defense Agency, which staged the drill in cooperation with Japan’s Maritime Self-Defense Forces, called it a “No Notice” test, more challenging than the first of its kind for a Japanese ship in 2007.

To make it more realistic, the time of the target’s launch was not disclosed to any participants, the Pentagon said in a “fact sheet” before the test.

Also, the target warhead separated from its booster rocket, increasing the challenge of picking out the re-entry vehicle, the Pentagon said.

In addition to the Chokai, a similarly equipped U.S. Navy destroyer, the Paul Hamilton, tracked and successfully performed a simulated engagement against the ballistic missile, Hicks said.

In December 2003, Japan decided to equip its four Kongo-class destroyers with Aegis ballistic missile defense systems at a cost of $246.1 million. Each installation was to be followed by a test intercept. The Kongo, the first to be upgraded, completed its flight test in December 2007.

Myoko, the third ship to be upgraded, is to be ready next year and Kirishima, in 2010, according to Lockheed Martin, the Pentagon’s No. 1 supplier by sales.