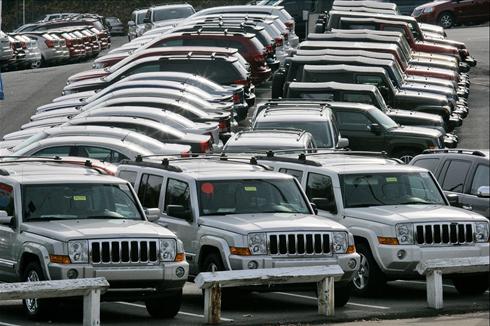 Unsold Chrysler products sit at a dealership in Dormont, Pa.

As Detroit’s crumbling auto industry asks Congress for a bailout, Chrysler is in the awkward position of paying about $30 million in retention bonuses to keep top executives while the company cuts thousands of jobs.

Chrysler owes the bonuses under its contracts with about 50 executives, based on a retention incentive plan crafted early last year by former German parent DaimlerChrysler, when it was preparing to sell the Chrysler unit.

Related article: Daimler: Chrysler worth nothing

Nancy Rae, Chrysler executive vice president for human resources and communications, said the move made sense at the time to ensure potential buyers that key Chrysler executives would remain in place after a sale. She acknowledged that the bonuses could be seen as controversial now.

“We all would be smarter if we knew what we know now back in February of ’07,” she said. “Probably a lot of different decisions would be made.”

Chief executives of Chrysler, General Motors and Ford Motor are expected to testify next week before a House committee on a proposal for $25 billion in low-cost government loans to help keep the companies afloat. Any aid is expected to come with limits on executive pay and bonuses. It is unclear whether those conditions would affect existing bonus plans – Chrysler’s was hatched around April 2007 – or merely limit future bonuses and golden parachutes.

Retention bonus plans are fairly common in volatile times and at troubled companies that are straining to attract and retain top talent.

But they have been controversial in recent automotive industry bankruptcy cases involving suppliers Delphi and Dana Holding. A 2005 change in U.S. bankruptcy laws forbade the payment of retention bonuses to executives just for staying at a company while it’s in bankruptcy proceedings.

Documents obtained by the Free Press show that at least six Chrysler executives are due to receive bonuses of more than $1 million apiece to stay through August 2009, the two-year anniversary mark of when private equity firm Cerberus Capital Management bought an 80.1% stake in Chrysler.

Those promised the largest retention bonuses:

In an interview this week, Rae said Daimler considered it necessary to develop the plan because potential buyers wanted assurance of a smooth transition.

“These were very conservatively constructed,” she said of the bonuses. “And keep in mind that it was Daimler doing it, Daimler selling the company and Daimler ensuring it was reasonable for a buyer. … This was a Daimler program.”

She added, “What was put in place at that time was very appropriate – not only” as a “market practice but for the environment, the conditions of the company, the potential sale.”

Peter Morici, a University of Maryland professor and former chief economist at the U.S. International Trade Commission, said he expects executive compensation to become a large issue during the debate over aid for the automakers. He questioned the need of retention bonuses for auto industry executives.

“Who are they going to work for?” he asked. “My feeling is they’ve run the companies into the ground.”

John Challenger, a human resources expert with Challenger Gray & Christmas in Chicago, acknowledged that such bonuses can be controversial but said companies see them as necessary to prevent loss of leadership during critical times.

“To get good people, the right people, then you often have to pay retention bonuses – otherwise they just won’t come or they won’t stay,” he said.

Rae said the Chrysler plan has succeeded in keeping talent in place.

“It’s been very successful in these challenging times,” Rae said.

With public support for helping auto companies weak, according to a Gallup poll, Congress has vowed to prevent big bonuses to executives as a condition of federal aid.

U.S. House Speaker Nancy Pelosi, D-Calif., said Congress will push next week to expand the nation’s $700-billion bailout of the financial industry, called the Troubled Asset Relief Program, or TARP, to include automakers.

“We’re very much interested in making sure there is shared effort and shared sacrifice,” Levin told the Free Press.

“Everyone said they fully understood that,” Levin said.

“They should take every step possible, including cutting executive salaries and bonuses, and exhaust all alternatives before coming to the taxpayers for tens of billions of dollars in help,” Grassley said in a written statement.

The bailout legislation providing aid to troubled financial institutions requires that companies “meet appropriate standards for executive compensation and corporate governance.” The rules prohibit new employment contracts with golden parachutes for executives of companies in which the Treasury takes an ownership position, but the language does not specifically address a retention bonus plan such as Chrysler’s, in place before any federal aid is requested.

So far, the government has provided aid only to publicly owned companies. If federal aid is granted to Chrysler, a private company, questions will likely arise over how much internal information Chrysler would be required to disclose.

Labor unions have protested that company executives should not be unduly enriched when they are laying off workers and cutting the pay and benefits of lower-ranking employees.

The UAW could not be reached for comment Thursday.

Delphi, which has been in Chapter 11 bankruptcy since 2005, has drawn fire from labor officials for executive bonus plans that were approved by the bankruptcy court. Union leaders claimed, unsuccessfully, that they were tantamount to retention plans because they had easily reachable performance goals.

Since Daimler first announced in February 2007 that it was considering the sale of Chrysler, it has been a difficult stretch for the Auburn Hills automaker. Chrysler’s U.S. sales this year have dropped further than any Detroit competitor – down 26% through October.

Since February 2007, the automaker has announced the elimination of 34,000 jobs, including salaried, hourly and contract positions.