Some investors tried to barge into a DBS bank branch on Hong Kong island, jostling with security staff who linked arms to form a human barricade. 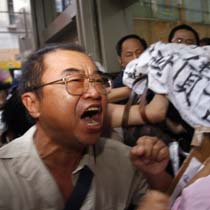 Lehman Brothers mini-bonds holders scuffle with officials during a protest against various banks which sold them the product in Hong Kong Friday.

“The banks are cheating us,” shouted some investors, while others banged gongs and waved protest banners accusing the banks of misleading investors on the risks involved.

DBS said in a statement e-mailed to Reuters that a dedicated customer care centre had been set up to deal with concerns.

“DBS Bank (Hong Kong) Limited is deeply concerned about the anxiety our customers are experiencing on this matter,” a spokeswoman said in the statement.

“Every customer is important to us and in cases where our standards are not met, DBS will not hesitate to make compensation,” she said.

But one investor who burst into tears outside a Standard Chartered bank branch, said she wasn’t convinced.

“Basically, the banks are trying to stall us, they are not willing to have dialogue with us,” said a lady surnamed Yim.

To deal with the stalemate, Hong Kong’s central bank said it would make available mediation and arbitration services between investors and banks with the aim of “settling claims in a speedy, confidential and amicable way, or of narrowing the issues in dispute.”

Banks will however have the right to refuse or accept mediation on a case-by-case basis.

DBS said earlier this week that most of the notes were worthless, provoking the investor backlash.

Investors in Singapore and Indonesia have also hit the streets in protest, expressing outrage that the failed products they bought were actually complex derivatives.