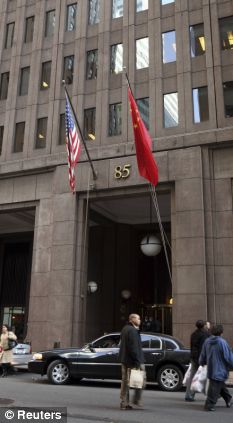 U.S. investment bank Goldman Sachs HQ which has set aside £7bn for bonuses and salaries this year

Goldman Sachs is on course to pay its top City bankers multimillion-pound bonuses – despite asking the U.S. government for an emergency bail-out.

The struggling Wall Street bank has set aside £7billion for salaries and 2008 year-end bonuses, it emerged yesterday.

Each of the firm’s 443 partners is on course to pocket an average Christmas bonus of more than £3million.

The size of the pay pool comfortably dwarfs the £6.1billion lifeline which the U.S. government is throwing to Goldman as part of its £430billion bail-out.

As Washington pours money into the bank, the cash will immediately be channelled to Goldman’s already well-heeled employees.

News of the firm’s largesse will revive the anger over the ‘rewards for failure’ culture endemic in the world of high finance.

The same bankers who have brought the global economy to its knees seem to pocketing the same kind of rewards they got during the boom years.

Gordon Brown has vowed to crack down on the culture of greed in the City as part of his £500billion bail-out of the UK banking industry.

The firm – known as Golden Sacks for the bumper bonuses it pay its top bankers – is expected to cut the payouts by a third this year.

However, profits are falling much faster. Earnings have plunged 47 per cent so far this year amid the worst financial crisis since the Great Depression.

This has wiped more than 50 per cent off the company’s market value.