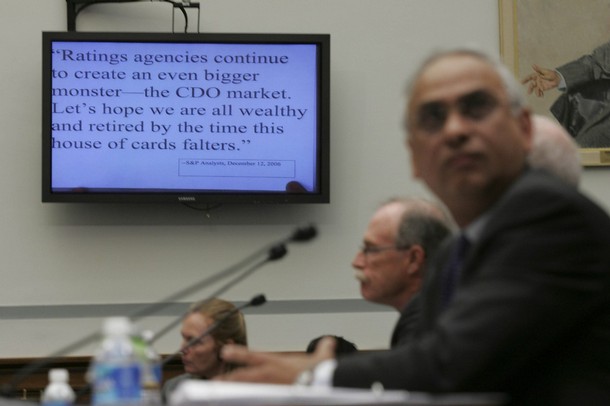 The downgrades contributed to the collapse of Bear Stearns Cos. and Lehman Brothers Holdings Inc., and compelled the U.S. government to set up a system to buy $700 billion of distressed assets from financial companies.

The Securities and Exchange Commission in a July report found the credit-rating companies improperly managed conflicts of interest and violated internal procedures in granting top rankings to mortgage bonds.

An e-mail that a S&P employee wrote to a co-worker in 2006, obtained by committee investigators, said, “Let’s hope we are all wealthy and retired by the time this house of cards falters.”

`Race to the Bottom’

Former executives from S&P and Moody’s told lawmakers today that credit raters relied on outdated models in a “race to the bottom” to maximize profits.

Jerome Fons, a former managing director of credit policy at New York-based Moody’s, told lawmakers that originators of structured securities “typically chose the agency with the lowest standards, engendering a race to the bottom in terms of rating quality.”

The top executives of the credit-rating companies said in testimony that they were unprepared for the sharp drop in home prices and that their systems failed.

“Events have demonstrated that the historical data we used and the assumptions we made significantly underestimated the severity of what has actually occurred,” said Deven Sharma, president of New York-based S&P.

“It is by now clear that a number of the assumptions we used in preparing our ratings on mortgage-backed securities issued between the last quarter of 2005 and the middle of 2007 did not work,” Sharma said in a written statement provided to the committee.

The company has improved its ratings process and transparency, Sharma said, and makes its criteria, analytics, and methodologies available to the public.

Stephen W. Joynt, president and chief executive officer of Fitch Inc. in New York, said it “is clear that many of our structured finance rating opinions have not performed well and have been too volatile.”

“We did not foresee the magnitude or velocity of the decline in the U.S. housing market, nor the dramatic shift in borrower behavior brought on by the changing practices in the market,” Joynt said in a written statement to the committee. “Nor did we appreciate the extent of shoddy mortgage origination practices and fraud” between 2005 and 2007.

“We saw and took action to adjust our assumptions for the portions of the residential mortgage backed securities market that we were asked to rate,” McDaniel said in written testimony. “We did not, however, anticipate the magnitude and speed of the deterioration in mortgage quality or the suddenness of the transition to restrictive lending.”

“We have learned important lessons from these fast-changing market conditions,” McDaniel said. The company has refined its rating methodologies, increased transparency of its analysis, and adopted new policies to avoid conflicts of interest, he said.

To contact the reporters on this story: Lorraine Woellert in Washington at lwoellert@bloomberg.net.