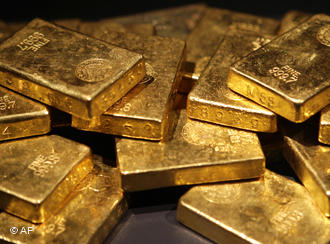 Gold dealers can’t keep up with the demand

German gold dealers have stopped taking new orders for the precious metal as demand has skyrocketed. Gold is seen as a safe investment during the market turmoil.

In uncertain economic times, Germans are dumping stocks and shares to take refuge in precious metal, accoring to a Wednesday article in a Berlin newspaper.

Heiko Ganss, head of the Berlin branch of gold merchant Pro Aurum, told the Berliner Zeitung newspaper that most gold traders were refusing new orders, as they couldn’t meet the current demand.

“Demand is running well above our capacity to supply,” he was quoted saying, saying retail banks in Germany were also unable to meet demand.

“Demand has exploded in the past few days,” said Stephan Henkel, a gold broker at Umicore, which presses gold bars and coins and puts them on sale. Delivery times were running at two to four weeks.

“Currently, demand is about 10 times what it is at normal times,” he said.