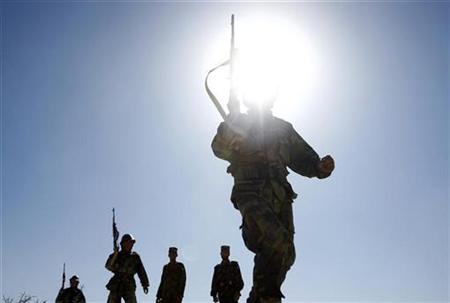 Afghan National Army soldiers raise their rifles as they train in Kabul Sept. 21, 2008.

WASHINGTON (Reuters) – U.S. intelligence agencies conclude in a draft report that Afghanistan is in a downward spiral and they doubt whether the Kabul government can stem the Taliban’s rise, The New York Times reported on Thursday.

The classified report says corruption inside President Hamid Karzai’s government and an increase in attacks by militants operating from Pakistan have accelerated the breakdown in central authority in Afghanistan, the Times said, citing U.S. officials familiar with the document.

Asked to comment on the intelligence report, U.S. Secretary of State Condoleezza Rice said she had not seen it herself but she confirmed that intelligence agencies had been asked to have a close look at Afghanistan.

“Afghanistan is a difficult place. It has made progress since 2001. We have all talked about new circumstances that have arisen there and we are doing a review to look to see what more we can do,” Rice told reporters before a meeting with Latvia’s foreign minister.

Agencies across the U.S. government, including the State Department and Pentagon, are doing a review of U.S. strategy in Afghanistan seven years after U.S.-led forces ousted the Taliban government.

“We are looking also at what we can do to be both supportive of the ministers that President Karzai has put up. We are looking to see where some of the strengths are and how we need to support those strengths and also how we can help the Afghans where there are weaknesses,” Rice said.

The New York Times said the intelligence report, a nearly completed version of a National Intelligence Estimate, is set to be finished after the November elections and will be the most comprehensive U.S. assessment in years on Afghanistan.

An NIE is a formal document that reflects the consensus judgments of all 16 U.S. intelligence agencies. Most NIEs remain classified.

Beyond the cross-border attacks launched by militants from neighboring Pakistan, the intelligence report asserts that many of Afghanistan’s most vexing problems are of the country’s own making, the Times quoted the officials as saying.

The report cites gains in the building of Afghanistan’s national army. But the officials said it also laid out in stark terms what it described as the destabilizing impact of the booming heroin trade, which by some estimates accounts for 50 percent of Afghanistan’s economy.

U.S. Army Gen. David Petraeus said on Wednesday that negotiations with some members of the Taliban could provide a way to reduce violence in sections of Afghanistan gripped by the intensifying insurgency.

Petraeus, the former commander in Iraq who is credited by U.S. officials with saving Iraq from civil war, is scheduled to take over U.S. Central Command on October 31. In his new post, he will oversee American military interests across the Middle East and into South and Central Asia.