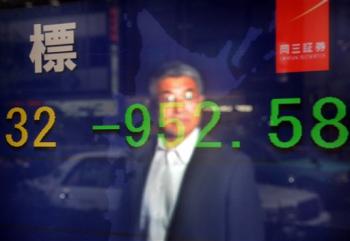 A passerby looks at the electronic stock board in front of a Tokyo brokerage Wednesday, Oct. 8, 2008 as Japan’s stock market plummeted 9.4 percent _ its biggest one-day drop in 21 years. The benchmark Nikkei 225 index nose-dived 952.58 points to 9,203.32, a five-year low. (AP Photo/Katsumi Kasahara)

The benchmark Nikkei 225 index nose-dived 952.58 points to 9,203.32, a five-year low. That was its third-biggest drop in percentage terms and the largest plunge since October 1987.

Toyota’s shares fell nearly 12 percent on concerns about its earnings amid a slump in the vital U.S. car market.

The massive sell-off in Tokyo follows a sharp retreat on Wall Street Tuesday, when the Dow Jones industrial average lost more than 5 percent despite steps by the Federal Reserve to reinvigorate dormant credit markets.

“No one knows the bottom of the ongoing financial crisis, and investors were really spooked by growing uncertainty over the global credit crisis,” he said.

Selling accelerated as investors were pessimistic that the finance ministers and central bankers from the Group of Seven industrialized nations would announce any effective measures at their meeting in Washington on Friday to tackle the global financial crisis, Takahashi said.

“Investors were taking a wait-and-see approach over the upcoming meeting, but today’s massive selling indicated that they were not so hopeful for concrete action by the G7,” he said.

The Nikkei index has lost a staggering 24 percent in the last two weeks.

Around Tokyo, individual investors were stunned by the day’s events.

Tomohisa Kubota, a 51-year-old businessman from Kobe in western Japan, described the stock market as “rolling down the hill.”

“I’ve been carefully monitoring the price movements, because that affects my finances,” said Kubota, who owns retail and manufacturer stocks. “But I didn’t expect the Nikkei to fall this much.”

Among the day’s biggest losers, Toyota Motor Corp. plunged almost 12 percent to 3,280 yen on media reports that Japan’s top automaker’s operating profit would fall 40 percent this fiscal year through March due to sluggish demand in the U.S. market.

Toyota Senior Managing Director Yoichiro Ichimaru said his company was sticking with its financial targets for now, including this year’s global vehicle sales goals. He acknowledged, however, that the numbers were becoming increasingly tough to meet because of a drop in U.S. sales.

The dollar briefly fell below the 100-yen level for the first time in six months as jittery investors dumped the greenback.

“Institutional investors are selling the dollar. Investors are simply spooked by a meltdown on Wall Street and its severe impact on the global market,” said Mitsuru Sahara, vice president of foreign exchange division at Bank of Tokyo-Mitsubishi UFJ Ltd.