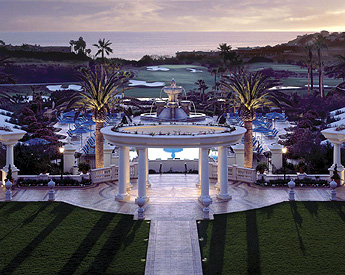 View from the Lobby Lounge Terrace

If you’d just gotten a government bailout, you might be tempted to hold a retreat at a nice California hotel — and that’s exactly what American International Group (AIG: 3.51, -0.36, -9.30%) executives did.

The committee on Oversight and Government Reform held a hearing on Tuesday at 10:00 a.m. Eastern time. to address and examine downfall of AIG, the world’s largest insurance company. The committee planned to discuss the financial excesses and regulatory mistakes that led to AIG’s government bailout.

One of the items discussed was AIG’s expenditure of $440,000 for a corporate retreat at the St. Regis Monarch Beach resort in Los Angeles, Calif. These funds were spent on Sept. 22, a week after the Federal Reserve extended an $85 billion emergency loan to AIG to keep it from going bankrupt due to insurance liabilities.

According to the receipt from the St. Regis, the eight-day company retreat was a lavish one — $139,000 was spent on hotel rooms, while even more money — $147,301 — was spent on banquets. Another $23,380 was spent on undisclosed spa treatments and another $6,939 was spent on golf. A full $9,980 was spent on room service and food and cocktails at the hotel lounge.

The St. Regis Monarch Beach resort is described on its Web site as “a landmark resort of legendary proportions.”