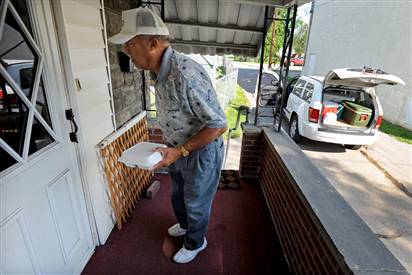 Matt Jackson of the Meals On Wheels program waits to deliver a meal to a home in Charleston, W.Va. The program is losing volunteer drivers nationwide because of rising gas prices.

Bankruptcies soar as retirees, agencies struggle to keep up with rising costs

Bob Emily put in an honest day’s labor every day of his life.

“I worked for the railroad, for the town marshal, security, bars, Sealy down here, UPS,” said Emily, 82, of Commerce City, Colo. “Worked hard all my life until I got sick.”

Then the bills started piling up.

“Hospital bills built up,” said Emily, who didn’t have health insurance. “I had to get loans to take care of my bills. Then I was getting behind on the loans.”

Every day, more calls and letters would come in from creditors and collectors. “I just got tired of it,” Emily said, so three months ago, he filed for bankruptcy.

That could take some of the pressure off. Then again, it might not. Food prices and medical costs are still rising, tarnishing what are supposed to be the golden years for the elderly, perhaps the hardest-hit victims of the slumping economy.

Elderly Americans are filing for bankruptcy in record numbers, according to a study by AARP, formerly the American Association of Retired Persons. At the same time, support is drying up from meal, transportation and other home assistance agencies that can’t pay their own bills.

“There’s no question that the downturn in the economy is dramatically impacting those at the doorstep of retirement and those that have already decided to retire,” said Mark Kitchens, a senior vice president of AARP.

Soaring bankruptcy among the elderly
The numbers are stark. Of the more than 1 million Americans who filed for bankruptcy last year, nearly a quarter were 55 and up, AARP found. Bankruptcy filings among those ages 75 to 84 skyrocketed by 433 percent from 1991 to 2007.

Halfway into 2008, workers at agencies that serve the elderly say the problem is only getting worse.

“We are getting more and more calls from seniors looking for jobs, every day,” said Peggy Clarke, director of a job bank run by Positive Maturity, a senior agency in Birmingham, Ala.

“Plus, their age is higher every time,” Clarke said. “We’re talking about people in their 80s who are saying that they have to go back to work, even if it’s part-time.”

At a bankruptcy hotline operated by Utah Legal Services, a nonprofit support agency, pleas for help pour in from seniors in debt, intimidated by persistent calls from bill collectors.

“They’re calling because they want to file for bankruptcy,” said Sylvia Bosen, a spokeswoman for the agency. “Some of them think they may go to jail.”

Services strain to keep up
Only 21 percent of employers offer supplemental health coverage to retired employees enrolled in Medicare, according to the AFL-CIO, making government and private senior service agencies crucial to keeping America’s elderly clothed, housed and fed.

But those agencies are buckling, hit by the same double-whammy of higher costs for food and fuel.

More than 2,000 Meals on Wheels programs nationwide have waiting lists because it is too expensive to deliver to all who need it.

In Honolulu, where Meals on Wheels delivers to 700 elderly people a day, the number of volunteer drivers is down about 20 percent, because drivers can’t afford the gas for their trips. The agency’s 50-cent-a-mile reimbursement doesn’t begin to cover expenses; as a result, the agency estimates, drivers now spend more than $300 a year out of their own pocket.

“We’re losing a lot of them because of the gas prices,” said Ben Brown, a volunteer driver in Kapalama. “If we can’t get gas, seniors won’t be getting their meals.”

For residents of rural areas, the pinch is even harder. Because many have limited mobility, they rely on senior transportation services to fill the gap left by sparse public transit.

Older Adult Transit Services in Columbia, Mo., is trying to keep its services affordable for the 30,000 rides a year it provides to grocery stores and doctors’ offices. But gas prices are making it tough to hold the line on its $3-a-ride fee, said Jack Heusted, the agency’s director of regional services. Daily gas expenses recently topped $1,300 a day.

“By the nature of our clients, they are elderly and disabled with low income, and this is getting to be very expensive for them,” Heusted said.

As a result, some services are in danger of disappearing, said Gordon Walker, chief executive of the Jefferson Area Board for Aging in central Virginia. The agency’s state and federal funding has remained flat for more than three years; now there isn’t enough money to provide for everyone.

“We’re having to put people on waiting lists for home-delivered meals, and we have a waiting list for air conditioners,” Walker said.

Many senior citizens are old enough to have lived through the Great Depression and the shortages of World War II, and they know how they should cope – if they could.

In a survey for AARP last month, more than half of respondents ages 50 and over said they had cut back on their grocery expenses. Nearly 40 percent predicted that some food items would need to be rationed within the next year, and most dramatically, 18 percent said they had started eliminating some meals entirely.

But while some elderly people can cut back, those with health issues often don’t have that option, said Jonathan Evans, chief of geriatric medicine at the University of Virginia Health System.

“People need what they need, and that need doesn’t go away,” Evans said. “This isn’t discretionary.”

Retirement? What retirement?
Retirement plans and government benefits must provide for average life expectancies reaching 20 years longer than they did in the 1930s.

But inflation and stock plunges are eating away at retirement accounts, while Social Security is shrinking – the 2.3 percent increase in benefits announced in January was the smallest in four years. By comparison, consumer prices rose more than twice as much over the past year, the Labor Department said last week.

More and more able-bodied seniors are simply not retiring. They can’t afford it.

In a survey conducted in April, Woelfel Research of Dunn Loring, Va., found that 27 percent of Americans 45 or older expected to delay retirement because of the economic downturn. One of them is John Looney of Denver.

“I have been saving every year for some 40 years now trying to get ready for this moment where I might be able to have a little more time for family, for friends,” Looney said.

Now he expects to have to work for at least five more years.

If anyone should know, it’s John Looney. He works for AARP.