The economy faces an “emergency situation,” Finance Minister Yuval Steinitz warned on Monday, while urging lawmakers to support the government’s draft budget, as Israeli exports plunged 32 percent in the first four months of this year 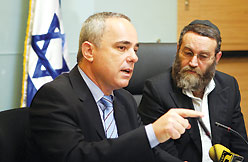 FINANCE MINISTER Yuval Steinitz (left) said at a meeting of the Knesset Finance Committee that the sharp decline in exports was ‘especially worrying.’ Photo: Ariel Jerozolimski

Gross domestic product shrank an annualized 3.6% in the first quarter, the Central Bureau of Statistics said on Sunday, demonstrating the “depth” of the crisis, Steinitz told the Knesset Finance Committee in Jerusalem. Export figures, which showed a 46% annualized decline, are “especially worrying,” he said.

“Whoever hasn’t understood until now how bad the crisis is, ought to understand now,” he said. “We are truly in an emergency situation.”