Following up this article..8400 Bq/Kg of lead-210 was measured from sample of Yokohama

390 mg/kg of lead was measured from the soil of the play ground of a nursery school in Yokohama.

Because arsenic and lead were found more than the safety limit of 150 mg/kg in the parking lot located next to the nursery school on 3/23, Yokohama city government was analyzing the soil of the nursery school.

Following up this article http://fukushima-diary.com/2012/01/fukushima-news-8400-bq-kg-lead-210-measured-sample-yokohama/

At first, a Japanese lab (Isotope research institute) measured Strontium-90 from the sample.

However Yokohama city government asserted it has nothing to do with Fukushima and the lab released this report after the announcement.

Following up this article about soil contamination in Yokohama…

Having measured Strontium-90 from the soil of Yokohama, we suspect it may contain plutonium too.

We took 200g of the same sample and sent it to Dr C.Busby.

As a result, it was not positive for plutonium nor americium but surprisingly 8400 Bq/Kg of lead 210 (pb-210) was measured.

Honestly we are puzzled by the result and don’t know what the potential risk will be.

– The Need for Independent Assessment of the Fourth Reactor (Akio Matsumura, by Gordon Edwards, Ph.D.Oct. 25, 2011):

In his recent blog, entitled “The Fourth Reactor and the Destiny of Japan”, Akio Matsumura correctly identifies the spent fuel pool in Unit 4 as the most serious potential threat for further massive radioactive releases from the Fukushima Daiichi nuclear power plant.

If not cooled by mechanical means for at least several years, the irradiated fuel in the spent fuel pool will overheat due to radioactivity alone. The heat generated by radioactivity must be removed as fast as it is being produced to keep the temperature of the nuclear fuel from soaring out of control.

In the last weeks, I have been speaking constantly with Japanese government and party leaders on this urgent issue. Surprisingly, most of them were not aware of the dangerous situation. I, along with many eminent scientists, are emphasizing the precarious situation of the fourth reactor that contains 1,535 nuclear fuel rods in the pool and is balanced on the second floor, outside of the reactor containment vessel. If the fuel rods spill onto the ground, disaster will ensue and force Tokyo and Yokohama to close, creating a gigantic evacuation zone. All scientists I have talked with say that if the structure collapses we will be in a situation well beyond where science has ever gone. The destiny of Japan will be changed and the disaster will certainly compromise the security of neighboring countries and the rest of the world in terms of health, migration and geopolitics. The Japanese government should immediately create an independent assessment team to determine the structural integrity of the spent fuel pool and its supporting structure. This is of the highest importance: the structure’s security is critical to the country’s future.

Read moreIf Fukushima Reactor No. 4 Fuel Rods Spill On The Ground Tokyo And Yokohama Will Be Lost

It looks like this person had the dirt on the rooftop tested on his own, and posted the test result sheet on his blog. 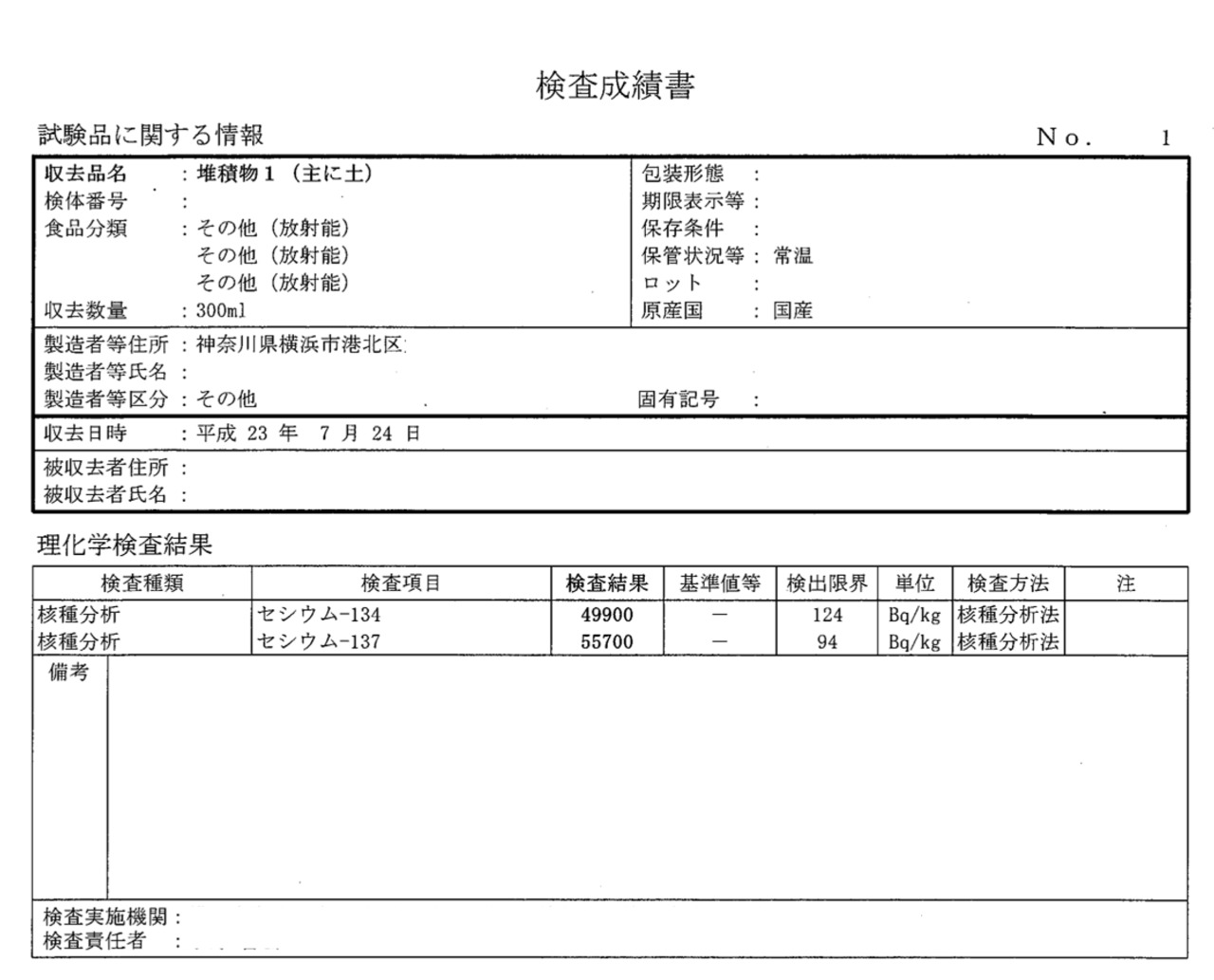 Meanwhile, this is how the Yokohama City workers (or the contract workers) “cleaned” the highly contaminated (42,000 becquerels/kg cesium) dirt from the side of the road. No protection, no masks, no rubber boots. 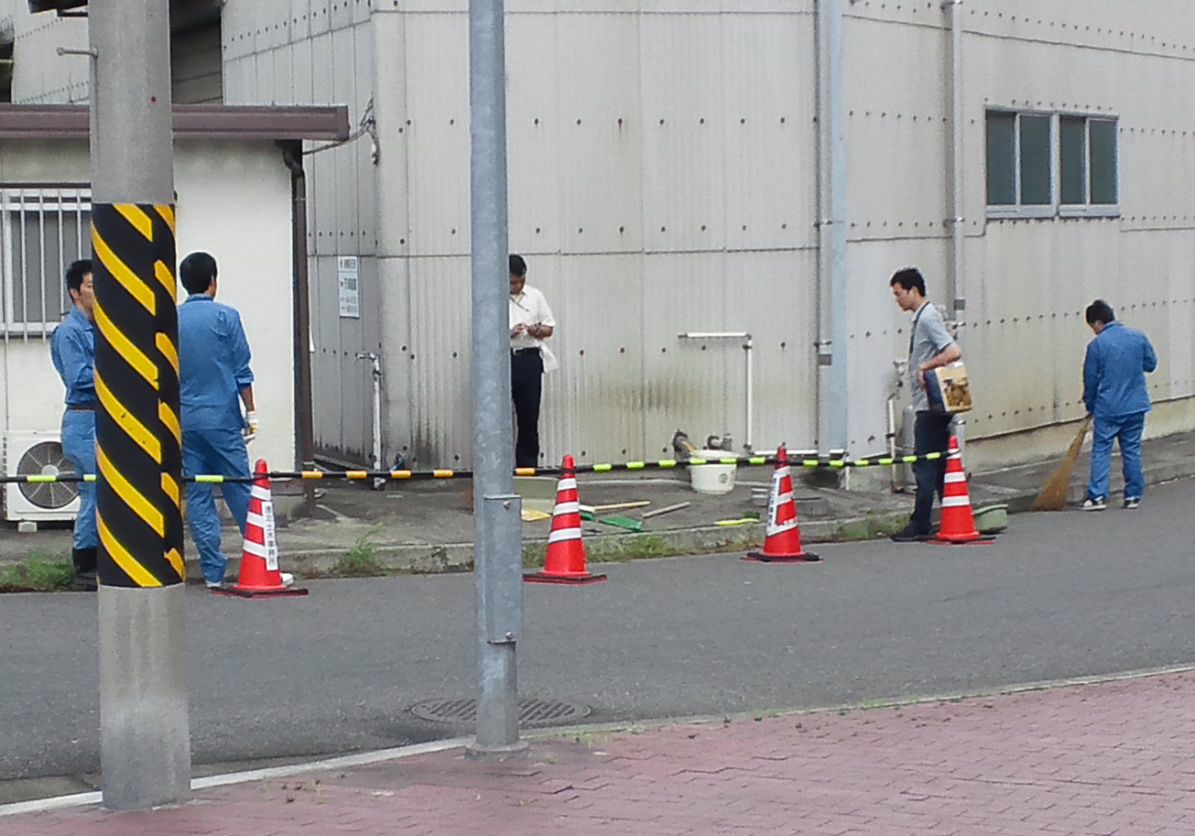 Yokohama City Assembly recently voted down the citizens’ petition asking the city not to accept radiation-contaminated disaster debris from Tohoku by the majority vote by the DPJ and LDP and Komei Party.