NEW ORLEANS (CN) – Ruling in favor of Transocean and BP, a federal judge on Thursday dismissed third-party environmental claims in a giant pleading bundle in the Deepwater Horizon oil spill litigation, saying the fact that the oil flow has stopped makes those lawsuits irrelevant.

“The injunction at this stage would be useless, as not only is there no ongoing release from the well, but there is also no viable offshore facility from which any release could possibly occur,” U.S. District Judge Carl Barbier wrote. “The Macondo well is dead, and what remains of the Deepwater Horizon vessel is on the ocean floor, where it capsized and sank in 5,000 feet of water.

“Moreover, BP and the agencies comprising the Unified Area Command have been and are cleaning up the Gulf of Mexico. An injury is not redressable by a citizen suit when the injury is already being addressed.”
Judge Barbier is overseeing the massive, consolidated oil spill litigation, which has been divided into “bundles,” based upon the nature of the claims.

In instances where claims in the D1 bundle pertain to how the oil is being cleaned up, Barbier ruled that even if he allowed those claims to go forward, the claimants are not directly involved in the cleanup, so a ruling in their favor would not affect how the cleanup is progressing.

Read moreFederal Judge Rules In Favor Of Transocean And BP: The Fact That The Oil Flow Has Stopped Makes Those Lawsuits Irrelevant

The statement ‘MAY HAVE BEEN INSENSITIVE’ is still NOT an admission that the statement actually was insensitive.

As George Carlin said: “They don’t give a fuck about you!” 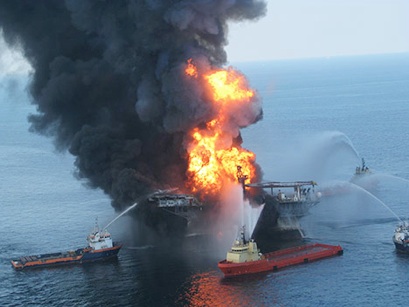 A few days ago Transocean stunned every sapient creature (with a memory just a little longer than that of momos chasing every up and downtick of Travelzoo stock) in the world after it announced it had achieved an “exemplary” safety record last year as measured by its total recordable incident rate and total potential severity rate, which in turn justified executives’ safety bonuses. For those who may have forgotten last year’s unprecedented Gulf oil spill, this is comparable to TEPCO announcing next year that management will receive record bonuses due to the company’s unprecedented ability to avoid hazard, not to mention nuclear power plant meltdown and recriticality. Luckily, it only took a few days for the firm’s PR division to realize someone may get very angry with the company’s spin of events, and as Reuters reports, the company has “acknowledged that its description of 2010 as its “best year in safety” despite a blowout that sank one of its rigs, killing 11 workers and causing a huge oil spill, might be insensitive.”

More on this unbelievable vocabulary malfunction:

Ihab Toma, the company’s executive vice president of global business, said some wording in that statement “may have been insensitive” given the Deepwater Horizon accident caused by a blown-out BP <BP.L> well in the Gulf of Mexico last year.

Read moreTransocean Admits To Vocabulary Malfunction: Says 2010 Safety Wording ‘MAY HAVE BEEN INSENSITIVE’

The company that owns the now-infamous Deepwater Horizon, the oil rig that caused immeasurable damage to the Gulf, recently applauded itself for the “best year in safety performance in our Company’s history.” The company, Transocean Ltd., rewarded its executives millions in bonuses for the achievement, according to the annual report it released yesterday.

Eleven people died as a direct result of the disaster in the Gulf, nine of them Transocean employees, according to Forbes.

“Notwithstanding the tragic loss of life in the Gulf of Mexico, we achieved an exemplary statistical safety record as measured by our total recordable incident rate and total potential severity rate. As measured by these standards, we recorded the best year in safety performance in our Company’s history, which is a reflection on our commitment to achieving an incident free environment, all the time, everywhere,” the company wrote in their annual statement to shareholders.