JERUSALEM — The Israeli military will on Monday deploy a battery of rocket interceptors from its “Iron Dome” system in the Tel Aviv region, a military spokesman said on Sunday.

“Iron Dome is being incorporated into the heart of the Israeli military. As part of this process, the system is deployed in different sites and will be in the Gush Dan region (of Tel Aviv) in the coming days,” he said in a statement that clarified the deployment would begin on Monday.

This deployment “is part of the annual training plan for this system”, he added.

Israel has denied that a decision has been taken to launch a pre-emptive strike on Iranian nuclear facilities. 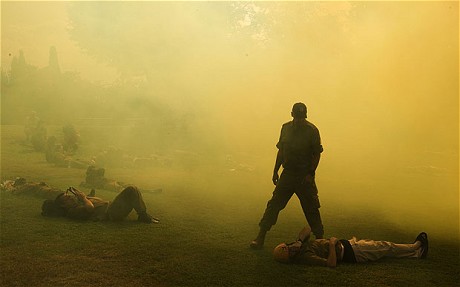 The young trainee was spotted by a female passer-by as he planted a fake bomb under a vehicle in the city.

He was only able to persuade police he was a spy after being taken in by an officer for questioning on Monday.

The authorities have refused to comment on the story although Israeli media outlets have expressed their surprise.

Mossad does not tell local uniformed police about its training exercises.