A NATO F-16 fighter jet has tried to approach the Russian defense minister’s plane above the neutral waters of the Baltic Sea. The plane was warded off by a Russian Su-27 escorting the minister’s aircraft.

Russian plane was en route to the city of Kaliningrad, a western Russian exclave between Poland and Lithuania on the Baltic Sea, where Defense Minister Sergey Shoigu is scheduled to discuss security issues with defense officials on Wednesday.

The incident was first reported by journalists of Russian state news agencies on board Shoigu’s plane.

– The Neoconservatives’ Hegemonic Goal Of Making Sovereign Countries Extinct Is Bringing Instead The Extinction Of Planet Earth:

My warning that the neoconservatives have resurrected the threat of nuclear Armageddon, which was removed by Reagan and Gorbachev, is also being given by Noam Chomsky, former US Secretary of Defense William Perry, and other sentient observers of the neoconservatives’ aggressive policies toward Russia and China.

Daily we observe additional aggressive actions taken by Washington and its vassals against Russia and China. For example, Washington is pressuring Kiev not to implement the Minsk agreements designed to end the conflict between the puppet government in Kiev and the break-away Russian republics. https://www.rt.com/news/325687-ukraine-rhetoric-sabotage-churkin/ Washington refuses to cooperate with Russia in the war against ISIS. Washington continues to blame Russia for the destruction of MH-17, while preventing an honest investigation of the attack on the Malaysian airliner. Washington continues to force its European vassals to impose sanctions on Russia based on the false claim that the conflict in Ukraine was caused by a Russian invasion of Ukraine, not by Washington’s coup in overthrowing a democratically elected government and installing a puppet answering to Washington.

Russia has made its first official comment following the latest escalations in Ukraine – and they are not peaceful-sounding – “We are dealing with the real genocide of both Russian and Ukrainian people,” said Russian State Duma Speaker Sergei Naryshkin, adding that Russia was shocked by the massacre in Odessa and mourns the victims together with their families. His words went further as he warned the perpetrators “will get what they deserve from their people.” The words though, have now been followed up by actions… as RIA reports that Russia’s Black Sea Fleet “will get new submarines and next-generation surface ships”, Russian Defense Minister Sergei Shoigu said Tuesday, voicing his concern at the increasing maritime activity of the US Navy. 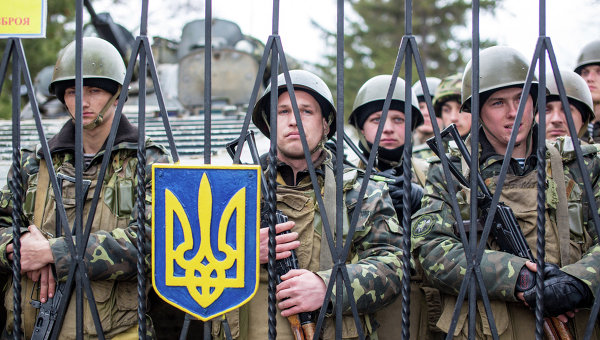 MOSCOW – A total of 72 military units in Crimea have hoisted Russian flags instead of Ukrainian and applied to join the Russian armed forces, Defense Minister Sergei Shoigu said on Friday.

“Yesterday, 72 military units almost in full strength decided to join the Russian armed forces. We are now dealing with service and citizenship issues of officers and soldiers from these units,” he said.

Shoigu said that every serviceman can choose from three options: continue his service in the Russian armed forces, end his service and stay in Crimea or leave the region.