And you thought fluoride and lithium were bad …

Has the “final revolution” arrived? 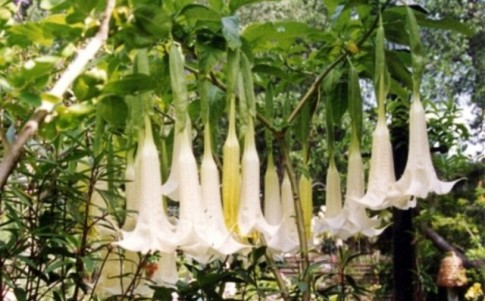 – FDA-approved drug turns ordinary people into obedient zombies… saps all free will… allows people to be programmed by the media or government… sold as transdermal patch (Natural News, July 19, 2015):

When I lived in Ecuador, I was warned about the pollen from the flower of a beautiful tree. The pollen is called “Devil’s Breath,” and when a tiny amount is blown into the face of an intended victim, it immediately saps that person’s free will, turning them into a compliance zombie who will do anything they’re commanded to do: Empty their bank account, engage in sexual acts or even donate a kidney.

This isn’t some urban legend, either. The Devil’s Breath pollen is rich in scopolamine, a potent drug that saps free will and turns people into zombies. Scopolamine can “can wipe the memory of its victims,” reports the Daily Mail:

Scopolamine can be blown in the face of a passer-by on the street, and within minutes, that person is under the drug’s effect – scopolamine is odourless and tasteless.

‘You can guide them wherever you want,’ he explained. ‘It’s like they’re a child.’

…The drug, he said, turns people into complete zombies and blocks memories from forming. So even after the drug wears off, victims have no recollection as to what happened. (Shhhhh! Please don’t tell Bill Cosby!)

If all this sounds exactly like what we’re all witnessing in American society today, that’s because drug companies have turned scopolamine into an FDA-approved prescription drug.

Recently-declassified US documents point to the forcible administration of a ‘truth serum’ of severe side effects to all the detainees at the US notorious prison in Guantanamo Bay, Cuba.

The documents detailed operating procedures for nursing staff at the facility, including the use of the drug, named scopolamine, The Sydney Morning Herald reported on Sunday.

According to the paper, information released by the CIA has shown that scopolamine had been disqualified as a truth drug because of its many undesirable side effects, including hallucinations, disturbed perception, headaches, rapid heartbeat, and blurred vision.