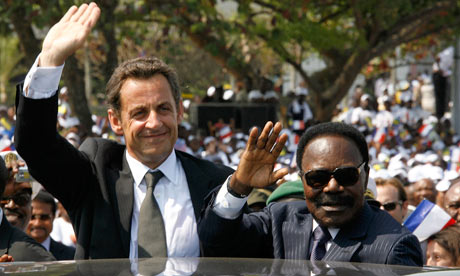 Gabon’s late president Omar Bongo allegedly pocketed millions in embezzled funds from central African states, channelling some of it to French political parties in support of Nicolas Sarkozy, according to a US embassy cable published by El País.

A senior official at the Bank of Central African States (Beac) told a US diplomat in Cameroon of Bongo’s “brazen” defrauding of the bank which holds the pooled reserves of six central African countries, including Gabon, Cameroon and the Democratic Republic of Congo.

Shortly after Bongo’s death in 2009, the US embassy in Yaounde said the bank source told them: “Gabonese officials used the proceeds for their own enrichment and, at Bongo’s direction, funnelled funds to French political parties, including in support of French President Nicolas Sarkozy.”

The cable, released by WikiLeaks, continued: “Asked what the officials did with the stolen funds, the Beac official responded, ‘sometimes they kept it for themselves, sometimes they funnelled it to French political parties.’ Asked who received the funds, the official responded, ‘both sides, but mostly the right; especially Chirac and including Sarkozy.’ The Beac official said ‘Bongo was France’s favourite president in Africa,’ and ‘this is classic Françafrique.'”