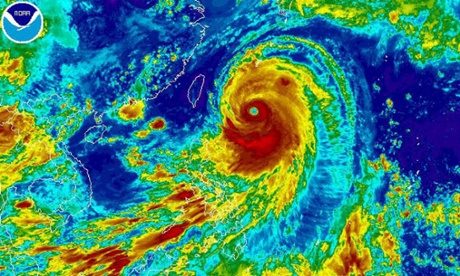 Gusts of up to 270km per hour (160 miles per hour) are expected to slam into the southernmost subtropical island chain early Tuesday, and may reach mainland Japan by Wednesday. The storm could be one of the worst in decades, the national weather agency said.

“If you burn firewood with 468 becquerels/kg of radioactive cesium, it will result in ashes with 85,176 becquerels/kg of radioactive cesium (468 x 182). Even by the lax “standard” of the Ministry of the Environment, you wouldn’t be able to bury these ashes in a regular dump, not to mention using it in your garden. You certainly wouldn’t want to use them in your noodles, because the transfer rate from the ashes to the noodles seems rather high from the example in the article.”

Radiation’s reach is indeed long. Okinawa is as far away as you can get in Japan from Fukushima I Nuclear Power Plant, and there has hardly been any radioactive fallout. Maybe because of that, businesses in Okinawa don’t seem to be much concerned about radioactive contamination in goods.

Here’s an example of some Okinawa restaurants having bought firewood from (of all places) Fukushima Prefecture via a distributor in Gifu Prefecture who clearly thought it could get away with it; one of the restaurants made the traditional “Okinawa Soba (noodle)” using the ashes from the radioactive firewood, and has already served the noodles to the customers.

As usual, the familiar refrain from the government officials: “There is no effect on health.” They might as well add “Just keep on smiling.”