Too many people believe the Disney version of what’s happening in Syria — gallant America riding a white horse to save the poor children of Syria from a brutal dictator. The truth about Syria is that the western elites have been trying to overthrow the government for many decades. Everything else is just drama for public consumption.

Here are some links to official CIA documents, WikiLeaks emails, secretly recorded audio tapes, and inadvertent truth-telling from media/political elites that demonstrate the ruthless regime change plans in Syria that involve many countries including the US, Saudi Arabia, Qatar, Turkey etc.

– NRA Endorses Trump; “A Fantastic Honor” Trump Responds, “I Will Not Let You Down”:

While hardly surprising, it is now official: the National Rifle Association has endorsed Donald Trump for president at today’s convention. Chris Cox, the executive director of the NRA’s Institute for Legislative Action, made the endorsement immediately before Trump walked on stage ABC reports.

The presidential primary season is finally over, and it is now time for gun owners to take a careful look at just where nominee Barack Obama stands on issues related to the Second Amendment. During the primaries, Obama tried to hide behind vague statements of support for “sportsmen” or unfounded claims of general support for the right to keep and bear arms.

But his real record, based on votes taken, political associations, and long standing positions, shows that Barack Obama is a serious threat to Second Amendment liberties. Don’t listen to his campaign rhetoric! Look instead to what he has said and done during his entire political career. 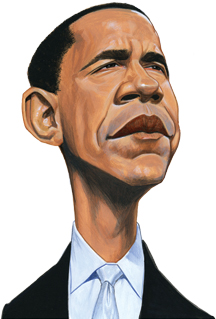 FACT: Barack Obama opposes four of the five Supreme Court justices who affirmed an individual right to keep and bear arms. He voted against the confirmation of Alito and Roberts and he has stated he would not have appointed Thomas or Scalia.17

FACT: Barack Obama voted for an Illinois State Senate bill to ban and confiscate “assault weapons,” but the bill was so poorly crafted, it would have also banned most semi-auto and single and double barrel shotguns commonly used by sportsmen.18

FACT: Barack Obama has endorsed a 500% increase in the federal excise tax on firearms and ammunition.9

FACT: Barack Obama voted to uphold local gun bans and the criminal prosecution of people
who use firearms in self-defense.5