– Crony Congress – Rep. Mike Rogers Has Links to the Benghazi Scandal Yet is in Charge of the Investigation (Liberty Blitzkrieg, April 9, 2014):

For those of you who don’t know Congressman Mike Rogers, he is the Representative hailing from Michigan’s Eighth District. He is also one of the biggest blowhard, chicken-hawk defenders of unconstitutional NSA spying in all of Washington D.C.

Back in 2012, he gave his support to internet spy bill CISPA by proclaiming: “Stand for America! Support this bill!” Naturally, this clown would also serve as Chairman of the House Intelligence Committee.

Rogers is notorious for being one of the staunchest critics of Glenn Greenwald. For example, earlier this year he made up all sort of lies about Greenwald in an attempt to smear the journalist. In response, Greenwald had the following to say about Rogers back in February:

Read moreCrony Congress: Rep. Mike Rogers Has Links To The Benghazi Scandal Yet Is In Charge Of The Investigation

“On another subject, a very important story that the US propaganda/obfuscation machine is not presenting on US media TV or US websites is this one. I thought this would be of interest to you. The amount of stuff this government is doing without telling anyone is shocking. These are the acts of a totalitarian dictatorship, not a republic.
With all the 24/7 news that isn’t being broadcast daily on TV, it is remarkable how no story of any portend gets covered. There are other stories related to this one on the UK Guardian.” 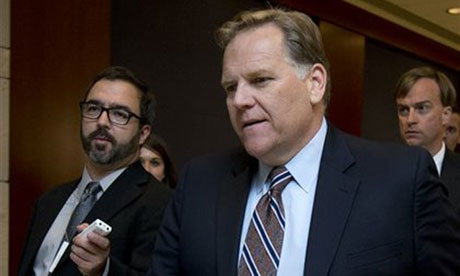 Mike Rogers, a former FBI agent, chairs the House intelligence committee. Critics have accused the committee of being too close to the NSA. Photograph: AP

The leadership of the House intelligence committee is under growing pressure to explain whether it withheld surveillance information from members of Congress before a key vote to renew the Patriot Act.

A Republican congressman and government ethics watchdogs are demanding that the powerful panel’s chairman, Mike Rogers of Michigan, responds to charges that the panel’s leadership failed to share a document prepared by the justice department and intelligence community.

Now Morgan Griffith, a Republican who represents Virginia’s ninth district, is calling for answers. “I certainly think leadership needs to figure out what’s going on. We’re trying to get information so we can do our jobs as congressmen,” he told the Guardian. “If we’re not able to get that information, it’s inappropriate.”

“Obviously, this is of concern,” he added.