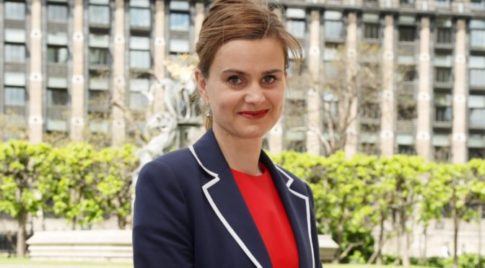 – Jo Cox Ain’t No Martyr; She Was A Syria-Hating Imperialist Killed In A Likely False Flag:

I’m not going to say I don’t have the intention of pissing on everybody’s parade because that’s exactly what I’m trying to do so let me just get on with it. Slain British MP Jo Cox is NOT a martyr. Okay? She’s not. She’s not a “martyr in the fight against resurgent Hitlerian fascism” as some idiotic “leftists” who are probably on the payroll of MI5 happen to be saying–a “resurgent Hitlerian fascism” mind you that doesn’t exist. She’s not a “martyr for European unity” either–a “European unity” mind you that means the preservation of the Zionist-dominated, absolutely hegemonic, totally dictatorial, insanely bureaucratic, multinational-corporation-adored, sovereignty-eroding European Union. And she’s not a “martyr for BDS” as some maddeningly moronic “Palestine Solidarity Movement” activists are referring to her as–a “BDS” mind you that does not target Jewish-Zionist-owned corporations outside of the ‘Israeli’ tumor which represent pillars of Global Zionism or even ‘Israeli’ individuals who live on stolen land, only ‘Israeli’ companies and ‘Israeli’-linked companies in the West that fall under the strict guidelines of the increasingly toothless BDS Movement. Not under any circumstances, not in ANY definition of the word, not in ANY applicable situation vis-a-vis our Mouqawamist-Liberationist discourse which we use to extricate our peoples and homies from mainstream Zio-controlled narratives is this rank, stank, putrid British Imperialist a “martyr”.

Read moreJo Cox Ain’t No Martyr; She Was A Syria-Hating Imperialist Killed In A Likely False Flag