President Trump has directed AG Sessions to clarify if ‘bump stocks’ are illegal; and to propose regulations to “ban all devices that turn legal weapons into machine guns.”

Just days after California started selling recreational marijuana to anyone over the age of 21, Attorney General Jeff Sessions has announced plans to rescind policies that have allowed states to circumvent federal laws and legalize the drug.  According to the Associated Press, the move by Sessions will require U.S. attorneys where pot is legal to decide whether to aggressively enforce federal marijuana law.

That’s according to two people with direct knowledge of the decision. They were not allowed to publicly discuss it before an announcement expected Thursday and spoke on condition of anonymity.

The move will leave it to U.S. attorneys where pot is legal to decide whether to aggressively enforce federal marijuana law. The move likely will add to confusion about whether it’s OK to grow, buy or use marijuana in states where it’s legal, since long-standing federal law prohibits it.

Attorney General Jeff Sessions has told associates he wants to put the entire National Security Council staff through a lie detector test to root out leakers. “Sessions’ idea is to do a one-time, one-issue, polygraph test of everyone on the NSC staff.”

– Anything Goes When You’re a Cop in America:

President Trump needs to be reminded that no one is above the law, especially the police.

Unfortunately, Trump and Jeff Sessions, head of the Justice Department (much like their predecessors) appear to have few qualms about giving police the green light to kill, shoot, taser, abuse and steal from American citizens in the so-called name of law and order.

Between Trump’s pandering to the police unions and Sessions’ pandering to Trump, this constitutionally illiterate duo has opened the door to a new era of police abuses.

As senior editor Adam Serwer warns in The Atlantic, “When local governments violate the basic constitutional rights of citizens, Americans are supposed to be able to look to the federal government to protect those rights. Sessions has made clear that when it comes to police abuses, they’re now on their own. This is the principle at the heart of ‘law and order’ rhetoric: The authorities themselves are bound by neither.”

Brace yourselves: things are about to get downright ugly.

President Trump could do the American people a favor by naming a new attorney general who opposes police state policies like the drug war and police state tactics like civil asset theft.

– In Early Tweetstorm, Trump Lashes Out At Sessions For Ignoring “Hillary Crimes”:

– Sessions: “I Will Continue Serving As Attorney General As Long As That Is Appropriate”:

Following his scathing NYT interview published on Wednesday, in which Trump said he regretted appointing the Attorney General, and said would not have chosen Sessions to serve as attorney general had known Sessions would recuse himself from the investigation into Russian election meddling, on Thursday AG Sessions said he plans to continue to serve in his post “as long as that is appropriate.”

After days/weeks of speculation regarding a further degradation of the relationship between President Trump and Attorney General Jeff Sessions, ABC is now reporting that things have become so tense that Sessions has actually offered his resignation. The friction allegedly dates back to Session’s abrupt decision in March to recuse himself from anything related to the Russia investigation – a decision Trump only learned about moments before the AG announced it publicly. Per ABC:

Moments ago Attorney General Jeff Sessions made a surprise appearance at Sean Spicer’s daily White House press briefing to announce that his DOJ will be taking steps to not only require that so-called “sanctuary cities” enforce federal immigration laws but would also be seeking to claw back past DOJ awards granted to those cities if they refuse to certify compliance.
…

– “This Is Either The Most Elaborate Cover-Up Of All Time, Or The Dumbest”:

As the mainstream liberal media continues to be handed leaks (on a smaller and smaller and more and more desperate basis) from what appears to be angry ex-Obama-ites lingering in the halls of Washington – ever ready to combat a slight rise in Trump’s popularity or shift in the “he’s the devil” narrative with some new “the Russians did it”-inspiring drivel – many Americans are growing very weary of the drip-drip-drip of nothingness. The latest leak – which was immediately met with howls from The Democrats screaming for his head – was the fact that then-Senator Sessions met with a Russian ambassador in his office in The Capitol during the campaign and did not tell Al Franken about it during his confirmation. As The Wall Street Journal remarks, the story about the connection between Russia and the Donald Trump presidential campaign is either the most elaborate cover-up of all time, or the dumbest.

Read more“This Is Either The Most Elaborate Cover-Up Of All Time, Or The Dumbest”

Attorney General Jeff Sessions announced he is recusing himself from investigations into Russian interference in American politics and contacts with associates of President Donald Trump, after the DOJ acknowledged he had contacts with the Russian ambassador during the 2016 campaign.

It took minutes, not hours, for top congressional Democrats to call on Trump’s Attorney General Jeff Sessions to resign on Wednesday evening after the WaPo reported that he had allegedly met with the Russian ambassador in the months before the election, meetings that Sessions did not disclose during his confirmation hearings.

– Schumer: “For The Good Of The Country, Sessions Should Resign”

– The Stupidity of Jeff Sessions Could Single-Handedly Bring Down Trump:

The corporate media would have you believe that the key to resisting Trump lies in the embrace of heinous individuals and institutions such as themselves, George W. Bush, and the CIA, as well as clownish figures manufactured by neocons such as Evan McMullin (formerly of both Goldman Sachs and the CIA). Ironically enough, though Trump supporters see these nefarious outside forces as the biggest threat to his administration, I believe that if Trump’s Presidency goes up in total flames it most likely will be the fault of the ridiculous fossil he chose as Attorney General, Jefferson Beauregard Sessions III.

U.S. Senator Jeff Sessions (R-AL), President-elect Donald Trump’s nominee for U.S. Attorney General, introduced the first so-called “Halliburton Loophole” bill back in 1999 before it was ever known as such.

Sessions co-sponsored the bill (S.724) with the climate change-denying Senator James Inhofe (R-OK). The bill called for the U.S. Environmental Protection Agency (EPA) to exempt enforcement of the Safe Drinking Water Act as it relates to hydraulic fracturing (“fracking”). 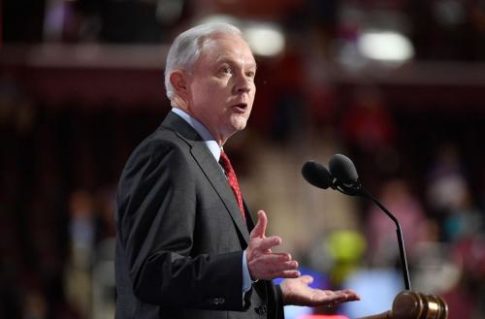 Some background on the Sessions appointment, courtesy of Bloomberg,  which elevates one of Trump’s earliest congressional backers, and one of the most conservative senators, to serve as the nation’s top law enforcement official.

The 69-year-old, four-term Alabama Republican is a hard-liner on free trade and immigration, arguing that prospective immigrants don’t have constitutional protections. He has opposed efforts to overhaul prison sentencing, back off the war on drugs and legalize marijuana.