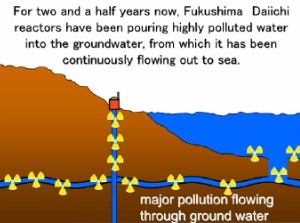 – Japan Journalist: Melted nuclear fuel sank into the ground under Fukushima reactors — Irradiated groundwater is flowing into ocean through sea-bottom springs, it’s too late to do anything about this (PHOTO) (ENENews, Oct 22, 2013):

Kyunghyang Shinmun (Major daily newspaper in South Korea –Source), Oct. 21, 2013: Japan‘s Prime Minister Abe Shinzo, promoting Tokyo as the site for the 2020 Summer Olympics, said to the International Olympic Committee: “Some may have concerns about Fukushima. Let me assure you, the situation is under control. It has never done and will never do any damage to Tokyo.” […] To [journalist Hirose Takashi], Abe‘s words were a bald-faced lie. And he decided to make this lie known to the world, especially the world of sports. He has written A Letter to All Young Athletes Who Dream of Coming to Tokyo in 2020, and to Their Coaches and Parents: Some Facts You Should Know. […] to conceal from them the truth about Tokyo today is not merely unkind; it is criminal. […]

Excerpts from Hirose’s letter: […] Inside Fukushima Daiichi Nuclear Reactors #1 – #3 the pipes (which had circulated cooling water) are broken, which caused a meltdown. This means the nuclear fuel overheated, melted, and continued to melt anything it touched. Thus it melted through the bottom of the reactor, and then through the concrete floor of the building, and sank into the ground. […] for two and a half years TEPCO workers have been desperately pouring water into the reactor, but it is not known whether the water is actually reaching the melted fuel. […] Only the fact that irradiated water is leaking onto the surface of the ground around the reactor is reported. But deep under the surface the ground water is also being irradiated, and the ground water flows out to sea and mixes with the seawater through sea-bottom springs. It is too late to do anything about this. […] It’s a sad story, but this is the present situation of Japan and of Tokyo. I had loved the Japanese food and this land until the Fukushima accident occurred. 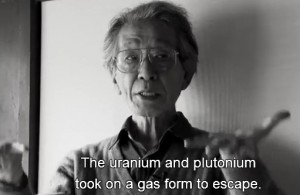 – Japan Journalist: Plutonium, Uranium Escaped Fukushima Reactors As Gas – Can’t Be Detected With Geiger Counter – Terrible Things Looming For Children, Must Be Evacuated Yet Nothing’s Done … This Is A ‘Criminal Nation’