May 24 (Reuters) – The Vatican bank’s board of directors voted unanimously on Thursday to oust President Ettore Gotti Tedeschi, and will seek to renew the lender’s ties with the world’s financial community, a statement from the Holy See said.

The board voted no confidence in Gotti Tedeschi “for not carrying out various fundamental functions of his office,” the Vatican said without giving details.

A new president will be hired to renew relataions with the international banking community, it said. The statement confirmed an earlier report from a senior Vatican source.

The Vatican bank, whose reputation took a blow last year over an investigation into money laundering, has fired Chairman Ettore Gotti Tedeschi after a tenure stained by a financial scandal.

In a vote of no-confidence, the board of directors unanimously agreed to remove Tedeschi, a Banco Santander SA banker who took the job in 2009, from his post for failing “to carry out various duties of primary importance,” according to a statement yesterday by Vatican spokesman Federico Lombardi.

“I would rather say nothing otherwise I would only have ugly words to say,” Tedeschi told reporters in Rome, according to Italian news agency Ansa. 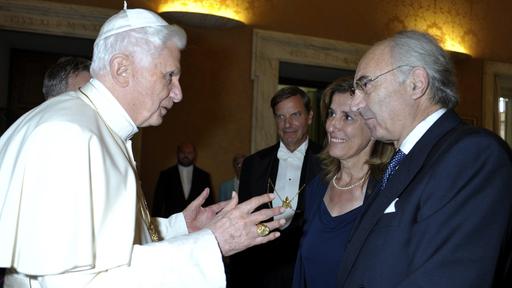 Ettore Gotti Tedeschi, former head of the Italy-Spain’s Santander bank should take account of the Vatican Bank in order and free them from Ruch shady business. But then the expert on financial ethics became even suspected to launder money, which was rejected by the Vatican. Surprisingly, he now lost the confidence of the bank board – and his office.

Although the reasons are not clear: either the Vatican once again bullied quite unholy or there is a new scandal into the house. The head of the Vatican Bank IOR, Ettore Gotti Tedeschi, namely, last night resigned as a complete surprise – or he has resigned.

In the afternoon he had spoken of the Supervisory Board of the Institute unanimously mistrust. This is surprising, because Opus Dei man Gotti Tedeschi, a former chief Santander banker in Italy was as honest and true professional was only three years ago was brought in as Aufräumer for IOR.