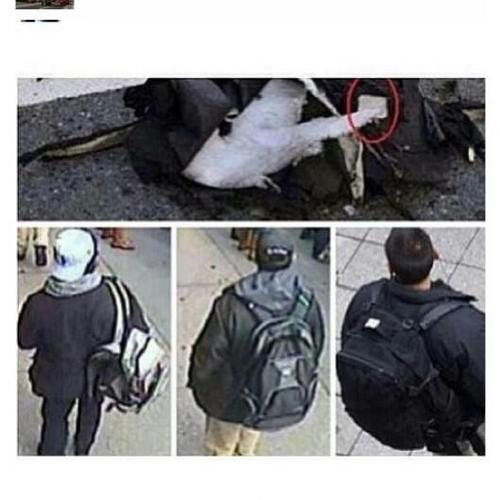 Alleged Boston Marathon bomber, Dzhokhar Tsarnaev, was convicted not on the basis of any evidence but by a jury intimidated by Tsarnaev’s prior conviction in the media by statements made by authorities precisely for the purpose of preventing a trial based on evidence. The jurors knew that the failure to convict would make them pariahs among their brainwashed families, friends, and communities. In former times when the US had the rule of law, the irresponsible statements by public officials repeated endlessly in the media would have likely resulted in the court dismissing the case on the grounds that public authorities had made a fair trial impossible.

Tsarnaev’s attorney knew that evidence would play no role in the case and focused on trying to save Dzhokhar from a death sentence by blaming the older brother who was killed by police. Perhaps Dzhokhar’s attorney remembered what happened to attorney Lynne Stewart who was sentenced to prison for representing a client for whom the government only wanted a pro forma representation.

He is innocent, yet…

– The Tsarnaev Trial And The Possibility Of A Plea Deal:

“When Judy Clarke joined the defense team for Dzhokhar Tsarnaev, it seemed a plea deal could happen in the case.”

… he is clearly used as a patsy.

The Boston Marathon second bomb, which Dzhokhar Tsaranev is accused of placing WAS BLACK WITH SIDE STRAPS — Dzhokhar’s backpace was WHITE. The Special Task Force (Richard DesLauriers agent in charge) claims they fingered Dzhokhar on the basis of a video showing him drop his backpack near the explosion. But the their photo and DesLauriers own statements establish that the backpack was black. Dzhokhar is innocent.

Note that the video showing him dropping his backpack was never shown — and all of those who have described it on the media only know about it from briefings they received — which they do not make clear in some of the media interviews. The lawyer appointed to represent Dzhokhar Tsaranev, Judy Clark, is hiding from the public, is not answering questions — and has shielded herself from citizens seeking to present the backpack proof of innocence. Judy Clark is convinced of Dzhokhar’s guilt and views it as her mission to argue for a life sentence rather than the death penalty. Dzhokhar is kept from the public — we cannot get this information to him — he probably has no idea that the bomb backpack was black. Obviously the appointed public defender was appointed because she will not fight to establish Tsaranev’s innocence which I have done so simply in this video. — Dick Eastman

– Will Justice Be Trashed In Boston? It’s a Marathon When Searching For Truth. (Gumshoe News)

Were ‘special operatives’ carrying the bomb at the Boston Marathon?

In several photographs a man in a special outfit is photographed with a black backpack (and a white square logo). This is ‘the’, or similar, backpack that the FBI claims to have carried the bomb. Dzhokhar Tsarnaev, though, was clearly photographed carrying a small grey-white pack. He is also photographed leaving the area, and as some commentators claim, still carrying his backpack (a detailed report here from informationclearinghouse). It appears also that his defense lawyer is not interested in sourcing this evidence for his defense.

It is a real concern when the justice system can no longer be considered ‘just’ or trustworthy. If so, then we are already living in a form of Tyranny. 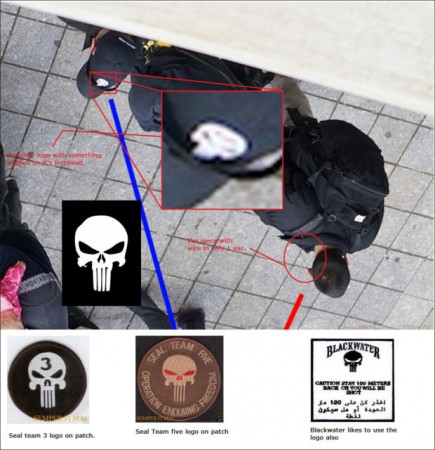 Ben Swann takes a look at the case of Ibragim Todashev, a young chechen who was friends with Boston Bombing suspect Tamerlen Tsarnev. Swann also interviews the widow of Todashev who says she believes an FBI agent executed Todashev during an interrogation.

The Department of Homeland Security has gone public with an admission that an exercise was planned months before the Boston Marathon bombings that involved backpacks being used to detonate explosives by rogue terrorists.

According to the DHS documents acquired by the Boston Globe, the agents were planning on conducting training exercises centered around a fictitious terrorist group called ‘Free America Citizens’, a group that would plant backpacks full of explosives around Boston that the detectives would be forced to track down. Ultimately, of course, this ended up happening at the Boston Marathon itself with precise accuracy. The Globe report reads that “the city was hit with a real terrorist attack executed in a frighteningly similar fashion.”

– Boston bombing suspect was shot in the FACE by police during his arrest and left with a fractured skull (Daily Mail, Aug 20, 2013):

Accused Boston Marathon bomber Dzhokhar Tsarnaev was badly injured when taken into federal custody with multiple gunshot wounds including one that had fractured his skull, according to recently unsealed court papers.

A trauma surgeon detailed the suspect’s condition during a hearing when the Chechen immigrant was first charged over the bombing attacks that killed three people and wounded about 264.

Read moreBoston Bomber Shot In The FACE By Police During Arrest, Left With Fractured Skull