It was about one year ago in November 2016 that the U.S. Environmental Protection Agency (EPA) approved Monsanto’s weed killer, XtendiMax with VaporGrip Technology, a dicamba variety that is supposedly less prone to vaporization and drift, designed for use with genetically engineered (GE) dicamba-resistant seeds. The chemical was supposed to solve earlier problems caused by Monsanto’s dicamba-resistant crops, which were released before they received approval for the less drift-prone herbicide.

As a result, illegal dicamba formulations were used, and the resulting dicamba drift caused significant damage to cropland across the U.S. The newer dicamba, however, did not prove to be the panacea that Monsanto had promised, and by November 2017, an estimated 3.6 million acres across the U.S. had been damaged by dicamba drift,1 as had trees in Iowa, Illinois and Tennessee.

Numerous states launched measures to prohibit dicamba sprayings, farmers suffered financial losses and, in some cases, neighboring farmers turned against one another as crops were damaged by the drifting chemical.

“Twelve years after Jeffrey Smith started his campaign exposing the dangers of GMO’s and their associated herbicides and pesticides, which even Government reluctantly concur with, the very fact Monsanto are still giving cash to farmers who buy their stuff is proof enough to me they don’t give a hoot about us OR our environment, and should be forcibly closed down.” 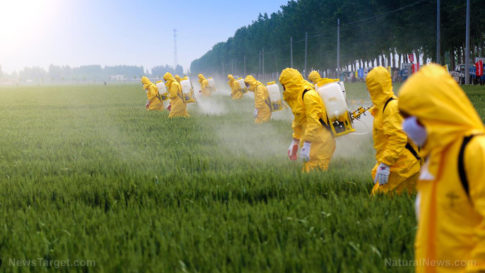 – Monsanto now offering CASH to farmers if they will use its toxic “dicamba” agricultural chemical:

The agri giant Monsanto, commonly known as the world’s most evil corporation, is now offering farmers cash in a desperate bid to distribute its XtendiMax with VaporGrip dicamba-based weed killer product. Reuters is reporting that Monsanto will be offering farmers refunds of over half the cost of the product in 2018, if they can prove that it was sprayed on soybeans known as Xtend, which have been specially engineered by the company to resist the toxic chemical.

These incentives are being offered even as the country is facing an agricultural crisis caused by dicamba-based products which evaporated and drifted away after being sprayed on crops.

Monsanto thought they had developed an amazing scheme to corner the Midwest farming market when they developed new genetically engineered seeds that were resistant to their new herbicide called dicamba.  The resistance of Monsanto’s new magical seed crops to dicamba meant that the herbicide could be sprayed liberally by farmers to eradicate weeds and boost yields.

Alas, as we pointed out last week (see: Meet Monsanto’s Other Herbicide Problem…), a small problem emerged when spray drifts from those liberal herbicide applications began to wipe out the crops of neighboring farmers who didn’t plant Monsanto’s dicamba-resistant seeds.

Now, as the Wall Street Journal points out today, after allegedly wiping out millions of acres of farm ground across the Midwest, Monsanto once again finds itself in a familiar spot: the courtroom.

– With Roundup On The Rocks, Monsanto Hatches New Seeds And A Dangerous New Plan:

Monsanto’s promises of a safe, “drift-free” dicamba have failed to materialize, as complaints have flooded into state agricultural departments across the country. So far this year, regulators have received nearly four years’ worth of complaints regarding dicamba-related crop damage.

So far, this year has not been very kind to Monsanto. First, collusion between Monsanto and the Environmental Protection Agency (EPA) was revealed, whereby the company worked in tandem with the federal agency to discredit independent research conducted by the World Health Organization’s International Agency for Research on Cancer (IARC). The IARC, in 2015, found that glyphosate – the key ingredient in Monsanto’s best-known product, Roundup — most likely causes cancer, a reality that Monsanto had secretly known for decades. Furthermore, Monsanto’s own head toxicologist, Donna Farmer, admitted that she “cannot say that Roundup does not cause cancer” as “we [Monsanto] have not done the carcinogenicity studies with Roundup.”

Farmers and conservation groups filed a federal lawsuit on Friday challenging the Environmental Protection Agency’s approval of Monsanto’s new “XtendiMax” pesticide. The approval, of the pesticide company’s latest version of the older weed-killer known as dicamba, permits it to be sprayed directly on Monsanto’s genetically engineered (GE), dicamba-resistant soybeans and cotton.

The decision greenlights a massive increase in use of the toxic pesticide, increasing risks to farmers, community health, and the environment. Because these same crops are also engineered to withstand applications of Monsanto’s Roundup, the overuse of that pesticide (containing the active ingredient glyphosate) will continue at current high levels.

– US EPA Approves Toxic Dicamba Herbicide for Use on GMO Crops;

Ignoring the legal requirement to examine threats to endangered species, the U.S. Environmental Protection Agency approved Wednesday the use of the dangerously toxic herbicide dicamba on crops genetically modified to tolerate the chemical.

Dicamba has been around for decades, but this new EPA decision allows the herbicide to be sprayed directly on genetically modified (GM) cotton and soybeans — opening the door for dicamba use to jump from less than 1 million pounds to more than 25 million annually on these two crops.

Studies2 have also linked glyphosate to increases in Sudden Death Syndrome (SDS), a deadly plant disease that causes plants to turn yellow and die — including crops that have never been sprayed with the herbicide but were planted in a field that received an application the previous season.

In an effort to skirt disaster, Monsanto developed a new breed of genetically engineered (GE) seeds tolerant to other pesticides besides Roundup. This, they claim, is the answer to rising weed resistance — a side effect the company said would not occur from the use of their GE seeds in the first place.

We now know, without any shadow of a doubt, they were wrong. And there’s every reason to believe they are wrong about their next generation of GE seeds as well. If anything, it will likely boost weed resistance, continue driving the increase in pesticide use and make our food even more toxic.

– Farm feud: Monsanto and its clients under fire for damaging crops:

Farmers in Arkansas, Tennessee and southern Missouri are angry at their neighbors – and agrochemical giant Monsanto – over a new weed-killer that has ravaged 200,000 acres of soybean fields. The herbicide is used to treat Monsanto’s new strand of soy.

As controversies mount over its glyphosate-based herbicide, also known as Roundup, the Missouri-based Monsanto has rolled out a new soybean seed intended to be resistant to another weed-killer, known as dicamba. While the “Roundup Ready 2 Xtend” soy has been approved for planting in 2016, US federal regulators have yet to approve the use of dicamba.

Farmers who bought Monsanto’s seeds have taken to spraying their crops with dicamba obtained from other vendors – which is prone to drifting into neighboring fields, severely damaging the non-Xtend crops. Officials across the three states cite a “rough figure” of 200,000 acres affected by the drift, Delta Farm Press reported.

Read moreFarm feud: Monsanto and its clients under fire for damaging crops

A new study by Argentine researchers (see abstract below) shows that dicamba and glyphosate herbicide formulations cause genetic damage in the larvae of a species of toad, Rhinella arenarum, when used separately.

Glyphosate (Roundup) alone is causing cancer and birth defects, among many other things, so this cocktail of death should be even safer.

In a letter to Testbiotech and GeneWatch UK, the responsible EU Commissioner Vytenis Andriukaitis admitted Monday that “it is true that the legislation requires cumulative and synergistic effects of pesticide residues to be considered,” for the new genetically-modified (GM) soybean varieties that have been designed to be grown with multiple herbicides.

At the same time, Andriukaitis also states that methods to assess these health effects are not yet available. The letter from the Commission was written in response to a call by the two organisations to stop market authorization of herbicide resistant genetically engineered soybeans. These plants can be sprayed with a combination of herbicides, such as glyphosate with dicamba or isoxaflutole.

Dicamba herbicide drift onto plants growing adjacent to farm fields causes significant delays in flowering, as well as reduced flowering, of those plants, and results in decreased visitation by honey bees, according to researchers at Penn State and the Pennsylvania Association for Sustainable Agriculture.

Earlier this year Reuters reported that Monsanto’s efforts to expand its agrichemical interests beyond what has long been its bread-and-butter glyphosate herbicide business were confirmed by plans to invest potentially more than $1 billion in a U.S. production facility for  Dicamba – as an alternative herbicide.

This study also points to a new reason for concern over the rapidly growing use of the herbicide dicamba. This persistent herbicide is recommended for use in fields infested with glyphosate-resistant weeds.

Dicamba increased the risk of cancer in the lung and colon, and has also been implicated as a risk factor for a range of birth defects and reproductive problems.

It was reported last week that Monsanto will be replacing their controversial herbicide RoundUp with another dangerous substance known as Dicamba.

In a statement released last month, the World Health Organization’s International Agency for Research on Cancer (IARC) announced that glyphosate, the main ingredient in Monsanto’s herbicide “RoundUp”, is “probably carcinogenic.”

The report indicated studies that “sufficiently demonstrated” that this substance caused cancer in animals. According to multiple reports, Monsanto was well aware that this chemical caused cancer for decades yet still continued to sell it.

The Agricultural Health Study (AHS) is the largest-ever assessment of the health of workers involved in U.S. agriculture, and has been underway for almost two decades. A review published in Environmental Health Perspectives summarizes the results of 27 studies using AHS data on linkages between pesticide use and exposure and elevated cancer risk.