MONTREAL — More than 80 pigeons have keeled over and died at a farm near Quebec City for unknown reasons, the latest in a string of mysterious animal deaths around the world.

Environmental officials in the province say there’s no connection to a similar case in Arkansas, but Sylvain Turmel is wondering why he’s been picking up dead pigeons for more than two weeks on his farm in Saint-Augustine-de-Desmaures.

The first dead bird was found on Dec. 18. He’s since found more bodies on his roof and inside the barn.

“I went to see my tenant to ask whether he’d been feeding them poison. He ended helping me pick up 25 corpses. In the time it took us to collect them, five more had fallen. Authorities thought it might be gas. But that’s not possible.”

A spokesperson for the Ministry of Agriculture and Fisheries said tests are currently being performed at the animal pathology lab in the provincial capital.

“The cause right now isn’t known,” said Nicolas Begin. “It’s not related to what happened in the U.S. (But) we don’t see this sort of thing every day and we’re treating this as a serious matter.” 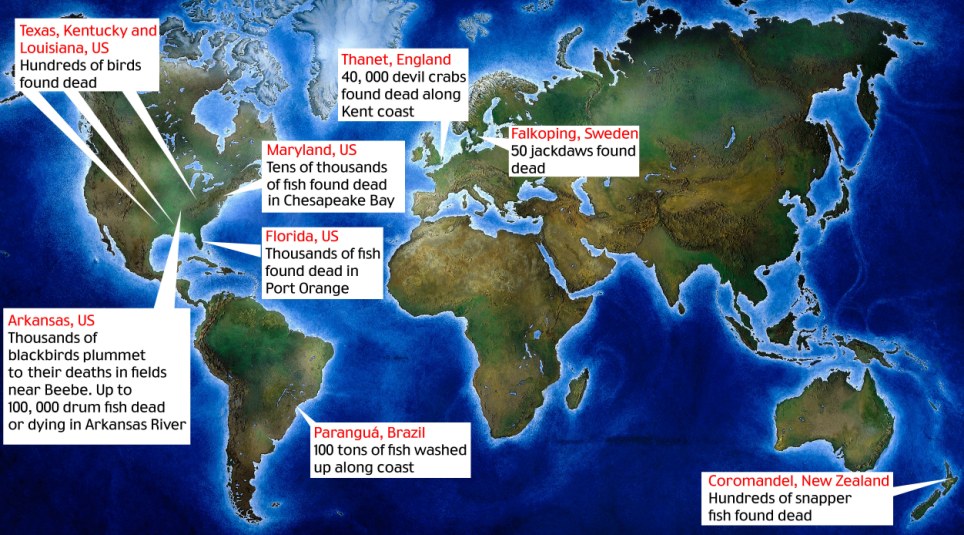 More and more animals are being found dead as the mysterious spate of mass bird and fish deaths has turned into a global phenomenon.

The latest two separate incidents saw thousands of fish found floating in a creek in Florida and 200 birds found dead on a highway bridge in Texas.

Experts were yesterday carrying out tests on around 50 jackdaws found dead in a street in Falkoping, Sweden, that appear to have suffered the same fate as thousands of their cousins who fell from the sky in separate incidents in the U.S.

Swedish experts have said the shock of fireworks being let off near the city, in the south-east of the country, and difficulty finding food may have led to the deaths of the jackdaws.

Many of the birds are believed to have died from stress or as a result of being run over by vehicles while disoriented.

And scientists have also been left baffled by at least 100 tons of sardines, croaker and catfish washing up dead along the Brazil coastline near Paranaguá.

There were more fish deaths reported today in New Zealand, while in England, the carcasses of 40,000 devil crabs are strewn across a beach in Kent.

Hundreds of dead starlings and robins were found scattered in backyards in the Kentucky town of Gilbertsville while an estimated two million dead fish have washed ashore in Chesapeake Bay, Maryland.

They are the latest in a spate of incidents which are being blamed on New Year fireworks, thunderstorms, cold weather, parasites and even poisoning.

The internet has been abuzz with conspiracy theories about secret government experiments being behind the deaths, or it being a sign of a looming Armageddon at the end of the Mayan calendar next year.

The mass deaths include:

Tests are being carried out on the dead animals, but results are not expected for several weeks.

Thousands of Brazilian fishermen are struggling to make ends meet after the sale of seafood was temporarily suspended when masses of fish were discovered dead in Paranaguá, Antonina and Guaraqueçaba Pontal do Paraná.

Experts have speculated that cold weather or chemical leaks could be behind the deaths.