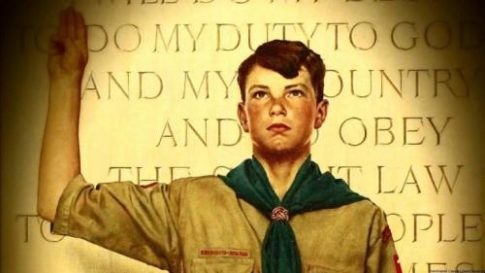 After 108 years with no issues pertaining to its gender specific name, the Boy Scouts of America has finally fallen to the pressure of liberal left, identity politics and is now set to drop the gender from its name and re-brand as “Scouts BSA”… a name that is more “inclusive”.

The gender neutral BSA will also soon welcome girls into its ranks, which means that the Girl Scouts of America will now be faced with the prospects of losing would be members to the new BSA.

Isn’t it funny how feminism and identity politics always seems to leave women (and girls) worse off than where they originally started.

Chief Scout Executive Mike Surbaugh, said of the announcement to drop the “Boy” in Boy Scouts…“we’re trying to find the right way to say we’re here for both young men and young women.”

NEW YORK (AP) — In its latest momentous policy shift, the Boy Scouts of America will admit girls into the Cub Scouts starting next year and establish a new program for older girls based on the Boy Scout curriculum that enables them to aspire to the coveted Eagle Scout rank.

Founded in 1910 and long considered a bastion of tradition, the Boy Scouts have undergone major changes in the past five years, agreeing to accept openly gay youth members and adult volunteers, as well as transgender boys.

The expansion of girls’ participation, announced Wednesday after unanimous approval by the organization’s board of directors, is arguably the biggest change yet, potentially opening the way for hundreds of thousands of girls to join.

WASHINGTON — President Barack Obama said Sunday that gays should be allowed in the Boy Scouts and women should be allowed in military combat roles, weighing in on two storied American institutions facing proposals to end long-held exclusions.The president’s comments in a pre-Super Bowl interview on CBS come ahead of this week’s meeting of the Boy Scouts’ national executive board. A proposal to open up the Scouts’ membership to gays is expected to be discussed and possibly voted on at the gathering in Texas.

When volunteers and employees were suspected of sexually abusing children, Boy Scout officials often didn’t tell police, files from 1970-91 reveal. In many cases they sought to hide the situation. 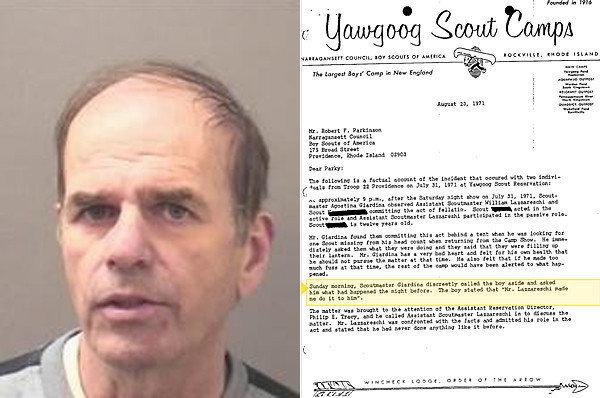 Assistant troop leader William Lazzareschi was expelled from the Scouts after he admitted engaging in a sex act with a boy, according to one file. But nothing in the file indicates the Scouts called police. (Rhode Island Parole Board & Sex Offender / September 16, 2012)

Over two decades, the Boy Scouts of America failed to report hundreds of alleged child molesters to police and often hid the allegations from parents and the public.
A Los Angeles Times review of 1,600 confidential files dating from 1970 to 1991 has found that Scouting officials frequently urged admitted offenders to quietly resign — and helped many cover their tracks.

Volunteers and employees suspected of abuse were allowed to leave citing bogus reasons such as business demands, “chronic brain dysfunction” and duties at a Shakespeare festival.

The details are contained in the organization’s confidential “perversion files,” a blacklist of alleged molesters, that the Scouts have used internally since 1919. Scouts’ lawyers around the country have been fighting in court to keep the files from public view.

A JURY has ordered the Boy Scouts of America to pay record punitive damages of $18.5m (£12m) to a man who was sexually abused by a former assistant scoutmaster more than 25 years ago.

Following the verdict Kerry Lewis, 37, said the decision to sue and testify in open court at the trial in Portland, Oregon, had been “very scary”.

The jury heard that when he was 11 or 12 years old, Lewis was repeatedly abused by Timur Dykes, the scoutmaster. Dykes had already admitted to a Scouts official that he had molested 17 other boys. Under Oregon law Lewis, also awarded $1.4m compensatory damages, must hand 60% ($11m) of the punitive award to the state.

Lawyers for Lewis told the six-week trial that because of his ordeal he had suffered from personality problems including drug abuse and difficulties in forming relationships.

The case is particularly damaging to the Boy Scouts of America, which is unrelated to the British organisation, because it drew attention to “perversion files” that it keeps at its headquarters in Texas.

Lawyers for Lewis said the files, more than 1,000 of which were shown to the court but kept secret from the press and public, detailed many cases in which volunteers were allowed to continue working with children even after the Scouts had received complaints that they were abusers.

(AP) — The Boy Scouts of America has long kept an extensive archive of secret documents that chronicle the sexual abuse of young boys by Scout leaders over the years.

The “perversion files,” a nickname the Boy Scouts are said to have used for the documents, have rarely been seen by the public, but that could change in the coming weeks in a Portland, Ore., courtroom.

The attorney for a man who was allegedly molested in the 1980s by a Scout leader has obtained about 1,000 Boy Scouts sex files and is expected to release some of them at a trial that began Wednesday. The lawyer says the files show the organization has covered up abuse for decades.

On Friday, testimony from a Mormon bishop responsible for a Scout troop of church members suggested that the Scouts never provided training about spotting abuse or preventing it.