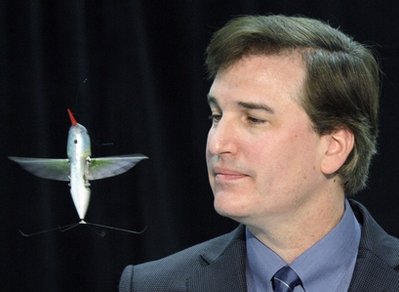 Matt Keennon, program director at AeroVironment, demonstrates a tiny, drone aircraft known as the ‘nano-hummingbird,’ during a briefing at the company’s facility in Simi Valley, Calif., Friday, Feb. 25, 2011. With a 6.5-inch wing span, the remote-controlled hummingbird plane weighs less than an AA battery and can fly at speeds of up to 11 mph, propelled only by the flapping of its two wings. It can climb and descend vertically, fly sideways, forward and backward, as well as rotate clockwise and counterclockwise, and hover.… Read more »
(AP Photo/Reed Saxon)

The Pentagon has poured millions of dollars into the development of tiny drones inspired by biology, each equipped with video and audio equipment that can record sights and sounds.

They could be used to spy, but also to locate people inside earthquake-crumpled buildings and detect hazardous chemical leaks.

The smaller, the better.

Besides the hummingbird, engineers in the growing unmanned aircraft industry are working on drones that look like insects and the helicopter-like maple leaf seed.

Researchers are even exploring ways to implant surveillance and other equipment into an insect as it is undergoing metamorphosis. They want to be able to control the creature.