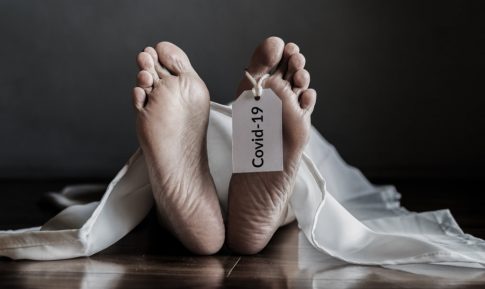 Corona is bad, changes society and life. We report on it. Stories that don’t make it into the media.
We give numbers a name and a soul. The “Collateral Damage” series is based on reports from those affected by corona policy. So that nobody can say: “We didn’t know that!”

From Johanna and Frank Wahlig

Several times a hospital doctor, Dr. M., death certificates in Bavaria on the instructions of the chief physician. The patients had died of cancer, heart or circulatory problems. Dr. M. should rewrite the death certificate as “Corona”. Afterwards. His conscience plagues him. Then it’s enough for him. “This is forgery of documents!”, He says and refuses this service. Readers of our column, whose relatives are said to have died in clinics with a negative corona test “to or with corona”, confirm this suspicion. The question of “Why?” Arises from the question: “Whom are the wrong corona deaths good for?”

There is no pandemic-related excess mortality in the 2020 corona year. Federal agencies and statisticians confirm this, as Göran Kauermann from the LMU Munich confirms in FOCUS Online. “When evaluating the death rates of previous years compared to last year, we saw that, over the whole year, there was hardly any significant excess mortality in all of Germany.”

The flu deaths have also “died out”. The health authorities in Berlin have been reporting five confirmed cases of flu for the 2020/21 flu season since autumn.

“Corona” has been on the death certificate since 2020.

Older people often spend their last days and weeks in homes and clinics. Alone. If the relatives then receive news of the death of the relatives, the surprise is sometimes great. Cancer, cardiac and circulatory failure is not on the death certificate after a long, known illness: the number of old people for whom “Corona” or “Covid-19” is on the death certificate is high. Even after several negative corona tests.

Jurist Cornelia from Bavaria, entrepreneur Iris from Brandenburg, a geriatric nurse from Berlin: Your elderly and sick relatives died with many underlying ailments despite negative corona tests according to the death certificate of “Covid-19”.

Falsifying death certificates can be viewed as an administrative offense or false certification according to Section 271 of the Criminal Code. Imprisonment: three months to five years. The doctors concerned have one foot in jail: If therapy for Covid 19 disease has not taken place in advance because the disease may not have existed at all. This would then even be interpreted as a failure to take appropriate treatment. And if a commission should be obtained afterwards for a possibly non-existent illness, this would even be assessed as fraud according to §263 StGB.

Who are the false corona deaths useful to?

The criminal behavior of the doctors seems desirable. In the general pandemic situation, keeping the corona death rate high is of benefit to the rulers and politicians on the one hand. The more impressive the number of infections and deaths, the higher the acceptance of the state-prescribed corona measures. Whether at the local health department, in the state or at the federal level.

The doctor from Bavaria was asked five times to retrospectively rewrite death certificates “to Corona”. From the clinic management. Then he refuses the service of this “manipulative investigation” and advises the chief doctor to commit this crime himself.

Of course, there are no official instructions and invoices for fake death certificates, says the hospital doctor. However, if a patient dies on or with corona, clinics such as the Charité receive retrospective 40 to 80 euros for an infection that is subsequently detected. Commission by death certificate. Will a “corona treatment” be billed retrospectively for patients who are subsequently reported as “infected”? There is no information about this. Whether the patients subsequently reported as “infected” are included in the statistics like the “false corona deaths”? The suspicion is obvious! As the last link in the chain of counterfeiting, the undertakers also earn money. The costs for the “last trip” increase with each “Corona death certificate”.