“The chemical weapons monitoring group confirmed they were prevented from visiting Douma not by Syrian or Russian authorities, but by the United Nations Department of Safety and Security (UNDSS).” 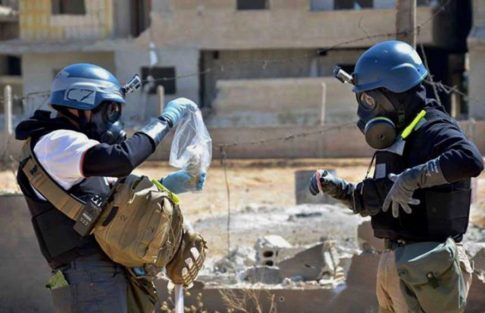 After many days of delay inside the security arch of Damascus’ city center, the international chemical weapons watchdog group, Organisation for the Prohibition of Chemical Weapons (OPCW), announced that its team of investigators finally entered the Damascus suburb town of Douma early on Saturday.

In an official statement posted to its website, the OPCW confirmed the following:

The Fact-Finding Mission (FFM) team of the Organisation for the Prohibition of Chemical Weapons (OPCW) visited one of the sites in Douma, Syrian Arab Republic today to collect samples for analysis in connection with allegations of chemical weapons use on 7 April 2018. The OPCW will evaluate the situation and consider future steps including another possible visit to Douma.

The OPCW Fact-Finding Mission will initially study the collected samples at an OPCW lab in the Netherlands, with potential sample distribution to its other designated labs. In the past, it’s take up to multiple weeks or months for the OPCW to issue a preliminary report to the public.

The samples collected will be transported to the OPCW Laboratory in Rijswijk and then dispatched for analysis to the OPCW’s designated labs. Based on the analysis of the sample results as well other information and materials collected by the team, the FFM will compile their report for submission to the States Parties to the Chemical Weapons Convention for their consideration.

It is unclear if any of what was collected includes tissue samples from corpses as it’s now being widely reported that the jihadist group which previously held the area – Jaish al-Islam – hastily buried the bodies of alleged chemical attack victims.

Though the team was invited into the country by the Syrian and Russian governments – both signatories to the international body devoted to decommissioning global stockpiles of banned chemical weapons – there’s been much spin and obfuscation regarding why the team was actually delayed, with a number of media outlets in the West falsely claiming that Syria and Russia were attempting a cover-up.

This was based in part on the unverified claims of political leaders in the West who have long sought Syrian President Bashar al-Assad’s ouster, and who have given covert aid to various jihadist rebel groups.

France’s foreign minister, for example, accused both Damascus and Russia of “obstructionism [which] is obviously undermining the caliber of the investigation. It is most likely aimed at removing evidence and other material elements linked to the chemical attack on the very site where it took place.”

However, in spite of multiple international headlines, Western leaders, and journalists who reside far outside of Syria claiming a chemical cover-up conspiracy in the making, the OPCW in official statements confirmed that they were prevented from visiting Douma not by Syrian or Russian authorities, but by United Nations Department of Safety and Security (UNDSS), which has the final say over OPCW movements within Syria.

On Wednesday (April 18) the Director General of the OPCW Ahmet Üzümcü, issued a statement which proved the “Syria/Russia hiding evidence” theory false:

On 16 April, we received confirmation from the National Authority of the Syrian Arab Republic that, under agreements reached to allow the evacuation of the population in Ghouta, the Syrian military were unable to enter Douma. The security for the sites where the FFM plans to deploy was under the control of the Russian Military Police. The United Nations Department of Safety and Security (UNDSS) has made the necessary arrangements with the Syrian authorities to escort the team to a certain point and then for the escort to be taken over by the Russian Military Police. However, the UNDSS preferred to first conduct a reconnaissance visit to the sites, which took place yesterday. FFM team members did not participate in this visit.

Though the OPCW statement further acknowledged the area to be a “highly volatile environment” fraught with “security risks” – a number of journalists actually made it into Douma early in the week prior to the OPCW team’s arrival.

Some among this early group of journalists which gained entry to the site, such as the UK Independent’s Robert Fisk and One America News Network’s Pearson Sharp found no evidence that a chemical attack took place in Douma, contrary to what’s been widely reported in international media.