“The system is able to identify 40 facial features, regardless of angles and lighting, at an accuracy rate of 99.8 percent,” reports People’s Daily. “It can also scan faces and compare them with its database of criminal suspects at large at a speed of 3 billion times a second, indicating that all Chinese people can be compared in the system within only one second.”

In the past two years, over 2,000 criminals at large were reportedly apprehended by public security cameras using the system – while officials tout a June 2017 rescue of a 6-year-old girl reported missing in northwest China’s Xinjiang Uygur Autonomous Region based on a photo taken several years ago.

The police officers still found the girl quickly thanks to the system, which established information related to the girl based on her facial features and locked in on her trace via a surveillance camera in a market. –People’s Daily

In January, Bloomberg reported that Beijing was using facial recognition to surveil Muslim-dominated villages on China’s western frontier, which alerts authorities when targeted individuals are more than 1,000 feet beyond designated “safe” areas.

The areas comprise individuals’ homes and workplaces, said the person, who requested anonymity to speak to the media without authorization.

“A system like this is obviously well-suited to controlling people,” said Jim Harper, executive vice president of the libertarian-leaning Competitive Enterprise Institute and a founding member of the U.S. Department of Homeland Security’s Data Privacy and Integrity Advisory Committee. “‘Papers, please’ was the symbol of living under tyranny in the past. Now, government officials don’t need to ask.” –Bloomberg

We’re sure the new facial recognition “SkyNet” will go hand in hand with China’s new “Social Credit Score” system set to launch in 2020. 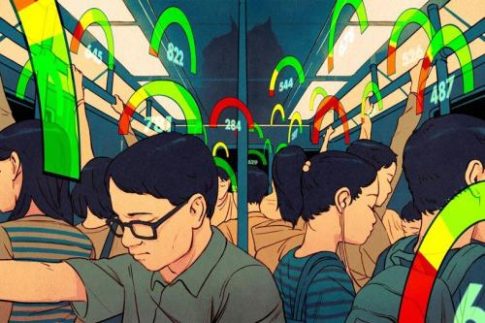 Imagine a world where many of your daily activities were constantly monitored and evaluated: what you buy at the shops and online; where you are at any given time; who your friends are and how you interact with them; how many hours you spend watching content or playing video games; and what bills and taxes you pay (or not). It’s not hard to picture, because most of that already happens, thanks to all those data-collecting behemoths like Google, Facebook and Instagram or health-tracking apps such as Fitbit. But now imagine a system where all these behaviours are rated as either positive or negative and distilled into a single number, according to rules set by the government. That would create your Citizen Score and it would tell everyone whether or not you were trustworthy. Plus, your rating would be publicly ranked against that of the entire population and used to determine your eligibility for a mortgage or a job, where your children can go to school – or even just your chances of getting a date.

In February 2017, the country’s Supreme People’s Court announced that 6.15 million of its citizens had been banned from taking flights over the past four years for social misdeeds. –Wired

And as the Washington Post noted, the Chinese city of Chongqing has engaged in a pilot project called “sharp eyes,” which connects various cameras throughout the region in order to fight crime.

The intent is to connect the security cameras that already scan roads, shopping malls and transport hubs with private cameras on compounds and buildings, and integrate them into one nationwide surveillance and data-sharing platform.

It will use facial recognition and artificial intelligence to analyze and understand the mountain of incoming video evidence; to track suspects, spot suspicious behaviors and even predict crime; to coordinate the work of emergency services; and to monitor the comings and goings of the country’s 1.4 billion people, official documents and security industry reports show. –WaPo

Perhaps China could have named their new facial recognition system after something other than the dystopian AI-controlled national defense system that led to the end of civilization in the Terminator series. Then again, maybe that’s the point. 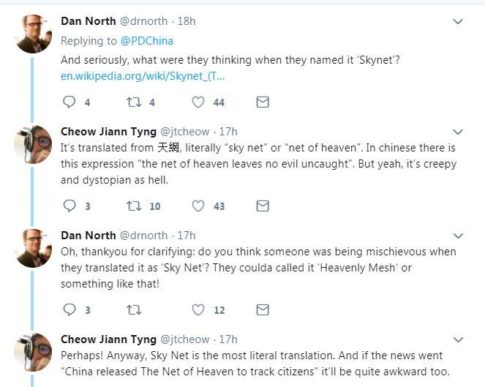 Welcome to the real world!