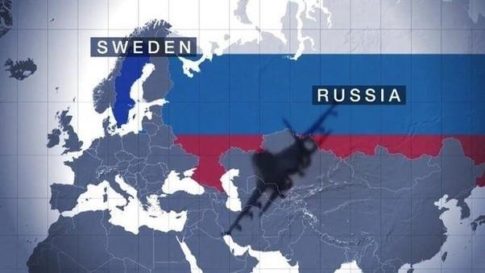 In yet another sign of what Russia expert Stephen Cohen has described as the escalating New Cold War, non-NATO aligned Sweden is initiating detailed plans to ready itself for total societal mobilization in response to military attack from a major external power. As Aaron Mehta points out in his exclusive for Defense News entitled Fortress Sweden: Inside the plan to mobilize Swedish society against Russia, that major external power is none other than Russia, whose heavily militarized port of Kaliningrad lies a little over 220 miles across the ocean from Sweden.

During past Cold War decades, Sweden (along with other non-NATO Nordic country Finland) was known for keeping painstakingly detailed survival readiness plans in case of a great power invasion, down to “how parking garages were designed so you could use them as shelters” according to Magnus Nordenman of the Atlantic Council. But the program was left derelict after the collapse of the Soviet Union and a new era of peace meant the end of such “total defense” plans.

But in 2017 a government sponsored commission was formed to investigate and lay the groundwork for plans to resurrect and update plans for total Swedish societal mobilization. Though the commissions findings were not set to be delivered until May 2019, it produced a 6-page preliminary findings report late last year (out of a total working report of 243 pages), likely in response to increased tensions between NATO and Russia in the Baltic region.

According to Defense News:

The report estimates that between 2021 and 2025, Sweden will need to invest 4.2 billion krona (U.S. $510.5 million) per year on its total defense proposals. While not a major spend by American defense levels, that is a serious investment for Sweden, especially considering it is additional money on top of what the country intends to invest in its armed forces.

Sweden has allocated about 400 million krona per year in 2018, 2019 and 2020 to invest in total defense developments. That culminates with a major exercise, tentatively planned for the year 2020, involving all aspects of the total defense concept — in essence, a trial run incorporating the entire nation.

The funds will be allotted as follows according to the preliminary report provided by the planning commission:

A lot will go toward infrastructure, such as building new shelters and depots. Other funds will go toward requirements to defend the homeland. Broadly, those funds will go to “rescue service and home protection, health-care system and pharmaceuticals, private enterprises, emergency power solutions, food and water supply, basic economic transactions, cyber security and psychological defense,” per the commission.

One of the more interesting aspects to the allocations of funds involves “training to resist propaganda efforts and fake news spread via social media” in order to – in the words of Swedish Defence Commission head Bjorn von Sydow – “defend the democratic principles that are vital to the nation.” 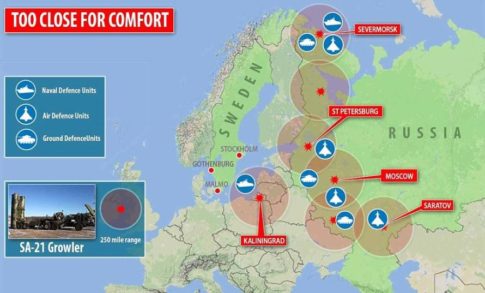 Daily Mail: Last year Russia deployed the SA-21 Growler anti-aircraft missile which can shoot down jets at a range of 250 miles.

The other interesting, and most controversial aspect, is that the study acknowledges a significant gap in time between the start of a major power invasion and mobilization of Sweden’s military, as well as the possibility of the arrival of allied ground forces necessary to repel a major invasion by a country like Russia.

The commission put Swedish military mobilization at a week, and allied force arrival at a whopping three months (based on talks commission representatives held with undisclosed NATO officials) – in the meantime “civilians would have to fend for themselves as best they can” – preparedness for which forms the basis of the commission’s study.

According to Defense News:

Early in the process, the commission seized on two key principals: that it would take Sweden’s military a week to be fully mobilized, and that it would take three months before allied ground forces would be able to arrive in force to assist Sweden in reclaiming its territory.

On the first point, von Sydow said it is a simple reality that to mobilize the entire nation would take time. For that week, civilians would have to fend for themselves as best they can — something he described as having been calmly received by the Swedish public.

The second point is perhaps more controversial, in that it’s based not on policy but on a mix of historic studies and conversations with allies. Because Sweden is not part of NATO, any military action would have to come from a coalition of willing allies.

And it’s an open question whether, in the face of what would realistically be a multi-pronged Russian invasion of Europe, any allied ground forces would actually come to Sweden’s aid.

Though there’s been a series of recent bilateral agreements with some European nations, and crucially including the U.S., a long tradition of Swedish neutrality has left the Scandinavian country without any definitive treaties wherein allies would be obliged to act.

Meanwhile, Sweden last year reintroduced military conscription for all Swedes born in or after 1999 (the prior conscription policy was abolished in 2010) in response to perceived as heightened Russian aggression in the region, and a build-up of forces in and along the Baltic Sea.