The UN??? You really can’t make this stuff up!

Again, the massive migrant influx just before the coming (planned) greatest financial collapse in (known) world history is not a coincidence.

– “We Paid A Heavy Price For This Mistake” – Europe To Be Flooded With 2nd Refugee Wave, UN Warns:

Back in 2015, at the height of Angela Merkel’s “open door” admission policy which in addition to granting German entry to over 1 million refugees, many of whom turned out to be radical jihadists and sent her approval rating crashing to the lowest in her career, the German chancellor realized that the great migration wave from the middle east into Central Europe, originally meant to reinvigorate Europe’s aging demographics (and prompted Deutsche Bank to even boost its German GDP forecast), maybe was not such a great idea, and was just not worth the risks and trade offs.

And while in the subsequent two years Germany in particular, and Central Europe in general managed to avoid another mass migration wave with most refugees gated either in Turkey or Italy, a second wave of migration into Europe now may be imminent as the situation in refugee camps in Africa and the Middle East is only getting worse, the head of the UN World Food Programme said. He added there is a clear link between hunger and migration.

“We paid a heavy price for this mistake and I’m afraid we’re about to make it once again,” Beasley believes. According to the UN food chief, while many asylum seekers wanted to stay in their home region, the lack of food has driven them away. “If they don’t have enough food, they will leave. And many of them would go to Europe,” Beasley said.

Beasley also warned that while the UN has been seemingly making progress in fighting world hunger over the last 10 years, the number of people suffering hunger worldwide has now dramatically increased again; he added that the food crisis is caused mainly by wars and climate change. Yemen is threatened by famine because Saudi Arabia is blocking the country’s ports, preventing aid deliveries, urging Gulf countries not to stand aside but instead join the food aid program for crisis-stricken regions, Beasley said.

A WFP report from March says that some 108 million people across the globe faced “crisis food insecurity or worse,” a dramatic increase from 2015 when the figure was 80 million. The document says that major food crises were fueled by “conflict, record-high food prices and abnormal weather patterns.”

The number of asylum seekers in the EU during the second quarter of 2017 reached 149,000, according to statistical data from Eurostat. The applications mainly came from Syria, Nigeria and Afghanistan. Germany, Italy, France, Greece and the UK account for almost 80 percent of all first-time applicants in the union, the data shows.

Of course, for Europe’s political oligarchs none of the above social dimensions of the migrant tragedy matters, but one thing does: the chart shown below which demonstrated that as of December 2015, there was a direct correlation between the approval rating of establishment politicians and the migrant flood hitting Europe. 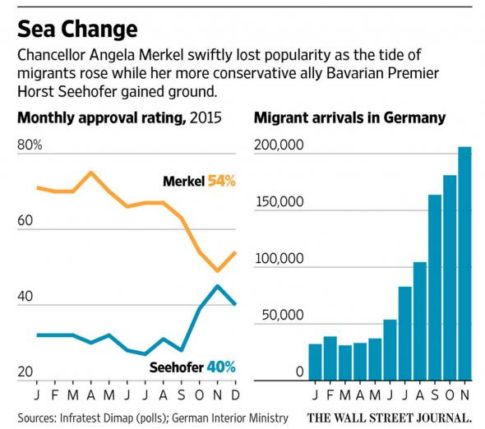 If Beasley is right, and Europe is indeed about to be flooded with millions of disgruntled migrants, the anti-establishment wave that brought brexit and countless subsequent tremors, will seem like a walk in the park next to the nationalistic backlash that will soon follow.