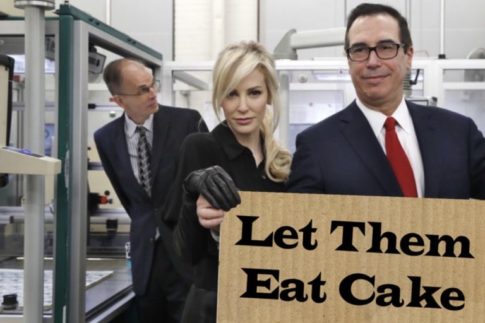 Unsurprisingly, the Republican tax plan moving forward in the U.S. Congress and championed by Donald “Drain the Swamp” Trump, is very swampy. Today’s post will highlight a few examples.

First, let’s hear some of what billionaire fund manager Jeffrey Gundlach had to say. Via Bloomberg:

“I’m very disappointed incidentally about the shape of this tax cut that is being proposed,” Gundlach told a gathering of industry participants at the Drake Hotel in Chicago on Wednesday. “I am just appalled that we are going to continue to have a carried-interest scheme for hedge funds.”

“After I saw that tax bill, I lost hope with the drain the swamp concept,” Gundlach said. “The swamp keeps getting bigger.”

Carried interest is the portion of a fund’s profit — usually a 20 percent share — that’s paid to managers. Currently, tax authorities treat that income as capital gains, making it eligible for a rate as low as 20 percent. The top tax rate for ordinary income is 39.6 percent.

He called the tax plan “a cosmetic tax decrease for the middle class that will go away over time.”

Of course, none of this is really surprising. Donald Trump’s been a Wall Street bootlicker ever since he came into office, just like Barack Obama before him.

But there’s much more swampiness to be had. For example, there’s the fact that the corporate tax rate cut is permanent, while the individual cut is temporary. From the Los Angeles Times:

A gambit by Senate Republicans to make a large corporate tax cut permanent by having benefits for individuals expire at the end of 2025 created new problems for the legislation Wednesday as lawmakers were still grappling with the controversial decision to add the repeal of a key Obamacare provision.

The decision by Republican leaders to double down on risky maneuvers to overcome budgetary hurdles with their tax overhaul threatened to put the entire effort in jeopardy.

Sen. Ron Johnson (R-Wis.) declared he would not support the bill because it treats large corporations differently than many small businesses, which pay taxes through the individual code.

“If they can pass it without me, let them,” Johnson told the Wall Street Journal. “I’m not going to vote for this tax package.”

He later said he hoped “to address the disparity so I can support the final version.”

Here’s some more on what Ron Johnson’s complaining about, via CNBC:

As a former small business owner, Johnson said he’s particularly concerned about the so-called pass-through rate, in which the profits and losses of sole proprietorships, partnerships, and S-corporations “pass through” to their owners who are then taxed at individual income-tax rates, currently as high as 39.6 percent.

“We can’t leave anybody behind, which is why they came up with the 25 rate for pass throughs,” he said. “The problem is, neither the House or the Senate version really honored that commitment to pass-through businesses, which I argue are a huge engine of economic growth.”

“I don’t have the information on how much it would cost, how many pass-through businesses are being left behind that do compete globally. I can’t get the information. I’ve been asking. They don’t give it to me,” said Johnson, chairman of the Senate Homeland Security Committee.

Moving on, if you’re still in denial that this “tax reform” was written for oligarchs and mega corps, take a look at the reaction of former Goldman Sachs executive and Trump’s White House Economic Council director, Gary Cohn, when his audience of corporate executives were asked a simple question.

The eagerness to shift incentives away from buybacks to capex is also the basis for much of Trump’s economic policy as designed over the past year by his top economic advisor, former Goldman COO Gary Cohn who is the White House Economic Council director. In fact, the motive behind the administration’s entire push for tax reform (cutting corporate tax rates) and offshore cash repatriation, is to the funds domestically, though not on buybacks and M&A (which also leads to “synergies” and other headcount reductions), but on reinvesting the funds in growing one’s business and hiring.

Which is why we were amused to observe the following brief interchange yesterday between Gary Cohn and an audience made up of executives, where in the span of a few seconds Gary Cohn realized that his entire economic policy had been a disaster.

Alas, as the camera revealed, virtually nobody raised their hand.

Responding to this “unexpected” lack of enthusiasm to invest in growth, Cohn had one question: “Why aren’t the other hands up?”

Ironically, Cohn’s epiphany took place just as tax reform is approaching the final stretch in Congress and it increasingly appears that at least some form of corporate tax cut will be enacted. We say ironically, because the only thing Trump’s reform will achieve is to dramatically accelerate recently slowing buybacks, which in turn will push stocks to new all time highs as price-indescriminate CFOs and Tresurers tells their favorite VWAP trading desk to just “wave it in.” Which means that the White House paper suggesting corporate tax cuts will boost household income is correct… if it focuses only on the incomes of the richest 1% of households.

Don’t despair, I promise there’s something in there for the average joe. For instance, after years of repression, owners of private jets will finally get that tax break they desperately need.

The latest version of the Senate Republican tax reform bill includes a break for companies that manage private jets.

A measure in the Tax Cuts and Jobs Act would lower taxes on some of the payments made by owners of private aircraft to management companies that help maintain, store and staff those planes for owners.

The language would exempt owners or leasers of private aircraft from paying taxes on certain costs related to the upkeep and maintenance of the jets, according to a description from the Joint Committee on Taxation.

I know, Congress sells out to special interests pretty cheaply. Fortunately, Rep. Joe Barton of Texas is looking out for the plebs.

Texas Rep. happy about tax bill because he gets to build a new colosseum. pic.twitter.com/eeq88tLJB5

In a new Quinnipiac poll, 25% of American voters approve of the Republican tax plan, compared with 52% who disapprove.

Among Republicans, support was 60%.

President Donald Trump has cast the tax plan as a boon to middle-class households. Nearly 60% of American voters in the Quinnipiac poll believe the Republican plan favors the rich at the expense of the middle class.

About 24% of American voters say the middle class will mainly benefit from the tax plan, while 61% say the wealthy would be the primary beneficiaries.

About 36% of voters believe the tax plan will propel economic growth, while 52% don’t believe it will.

Asked whether Senate Republicans have 51 votes to pass the bill as it stands, Mr. Mnuchin said, “I am confident we are going to get this passed in the Senate.”

Mr. Mnuchin brushed aside suggestions that the bill is unpopular, refusing to comment on a Quinnipiac poll showing 16% of voters believe the bill will reduce taxes.

He also said “virtually everybody in the middle class will get a tax cut,” and that only “people who are making more than $1 million in high-tax states who will be making more.” Even people in high-tax states would reap the benefits of a lower corporate tax rate and other changes meant to help businesses that will boost economic activity, he said.

Guess he missed the recent video of his buddy Gary Cohn.

The more people learn about this monstrosity, the less they like it. Unfortunately, by that point it’ll be too late.