– Australia: Imam says that women need to wear hijab so that men can control their sexual urges:

A hardline Islamic leader says women need to wear the hijab so men can control their sexual urges.

Australian rock band member and convert to Islam, Sheikh Zainadine Johnson puts the responsibility of controlling male sexual predators on women, and he cites the Qur’an to do so. There are many who still insist (or believe) that it is not an Islamic religious requirement for women to cover up, but it is:

If women do not cover according to this specification, they can be abused:

O Prophet, tell your wives and your daughters and the women of the believers to bring down over themselves [part] of their outer garments. That is more suitable that they will be known and not be abused. (Qur’an 33:59)

“Sheikh Zainadine Johnson has weighed into sex scandals surrounding Hollywood producer Harvey Weinstein to advise women on the need to cover up.” This embarrassing view of men as animals and women as meat who need to guard themselves against attack and be the keepers of the male’s behavior is not unique to Sheikh Zainadine. He no doubt agrees with Sheikh el-Din al-Hilaly’s comparison of men to animals and women to meat. According to al-Hilaly:

It is this doctrine and the Western tolerance of it that was behind the sex scandal of Muslim rape gangs abusing innocent girls in the UK; the Muslim rapists referred to the girls as “white trash” and “easy meat.”

Recently, the principal of a school in Sweden blamed girls for being sexually abused by Muslim men, and told them to cover up.

The Islamic doctrines and ideologies that sanction violence against women as inferiors, as well as violence against infidels and apostates must be openly discussed and addressed. The “Islamophobia” narrative stymies such open discussion. It is not about stopping intolerance, but about shutting up critics of Islam.

Sheikh Zainadine Johnson, who advocates for and pushes the Sharia, also recently preached that Muslims must not celebrate Christmas, because it is against Allah. 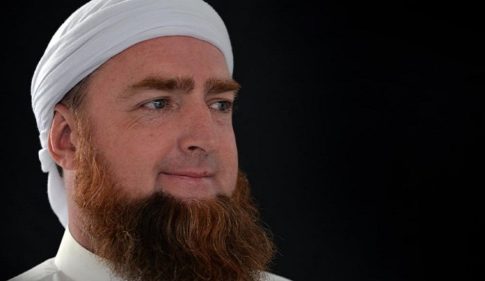 “’They should be able to control their sexual urges but they don’t’: Hardline Australian imam says women need to wear the hijab to keep men at bay – and tells them to avoid wearing bracelets in public”, by Stephen Johnson, Daily Mail Australia, November 5, 2017:

A hardline Islamic leader says women need to wear the hijab so men can control their sexual urges.

‘Men should be able to control themselves. This is a common argument against the Islamic hijab,’ he told his Facebook followers.

‘I totally agree, they should be able to control themselves, however facts show many don’t, this is why a hijab is necessary for women.’

The Muslim-convert and Sharia law advocate, who used to play in a band, followed this up with a sermon urging women to avoid wearing bracelets out in public.

‘There’s no problem with a female wearing a gold bracelet and making herself look beautiful as long as it’s underneath her hijab or at home, no problem,’ he told the Logan City Mosque south of Brisbane on Friday night.

‘In front of her husband, no problem. But on the streets wearing it? No.

‘In front of the people, this is not what’s permissible.’

Sheikh Johnson’s argument linking the hijab with keeping at bay the sexual urges of men has echoes of controversial remarks by former western Sydney-based grand mufti Sheikh Taj el Din al-Hilaly, who in 2006 described women who don’t wear the hijab as ‘uncovered meat’.

Sheikh el-Din al-Hilaly told 500 worshipers in September 2006 that women were asking for attention when they failed to cover up their flesh with a hijab.

‘If you take out uncovered meat and place it outside on the street, or in the garden or in the park, or in the backyard without a cover, and the cats come and eat it … whose fault is it, the cats or the uncovered meat?,’ he asked.

‘The uncovered meat is the problem.’…..