– 800 US school websites hacked with “I love Islamic State,” Islamic profession of faith:

What is ironic about this is that in the vast majority of those schools, if not all of them, students are taught that Islamic jihad violence has nothing to do with Islam, and that Muslims are the victims of large-scale “Islamophobia,” such that concern about jihad terror is “hateful,” “bigoted,” and “racist.”

Reality broke through with this hack, but it is unlikely that anyone in any of these 800 schools will get the real message that was being conveyed. 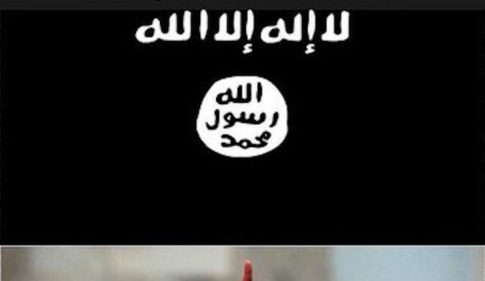 Hackers managed to hijack and deface hundreds of websites across the US to post pro-ISIS messages, images of Saddam Hussein and a recruitment video. SchoolDesk, the Atlanta, Georgia-based web hosting company servicing these sites, confirmed the attack. A hacking group going by the name “Team System Dz” claimed responsibility for the hack that took place around 4am EST on Monday (6 November).

The main page on the compromised sites displayed a black background with photo of former Iraqi leader Saddam Hussein along with the Arabic message seen on the Isis flag that reads: “There is no god but Allah” and “Mohammed is the Messenger of God.”

Further down the page, the hackers posted a message in English that read: “I love Islamic State.”

SchoolDesk said it “immediately responded” to the situation and took all the compromised websites offline “until the situation could be fully researched.”

“Our technical staff discovered that a small file had been injected into the root of one of the SchoolDesk websites, redirecting approximately 800 school and district websites to an iFramed YouTube page containing an audible Arabic message, unknown writing and a picture of Saddam Hussein,” SchoolDesk said in a statement.

“Although the exact method and point of intrusion is not yet fully known (possibly an SQL injection or through a user account with a weak password), we have added multiple layers of redundant protection to prevent this from happening again, as well as taking many additional methods to research how this was accomplished and by whom.”…