Watch the video to see the large M8.4 earthquake reported from the Russian agency:

We have a mystery on our hands (yet again).

As if we are in an episode of the twilight zone, or stuck on a skipping hard drive within the matrix, yet once again we have a VERY large earthquake reported (M8.4 in the rainforests of Peru) after we issued a warning for a M7.7 to M8.7 earthquake to strike the Pacific this week.

Some people have messaged me, and are trying to say it is a “mistake”.

I suppose they mean it’s a MISQUAKE. 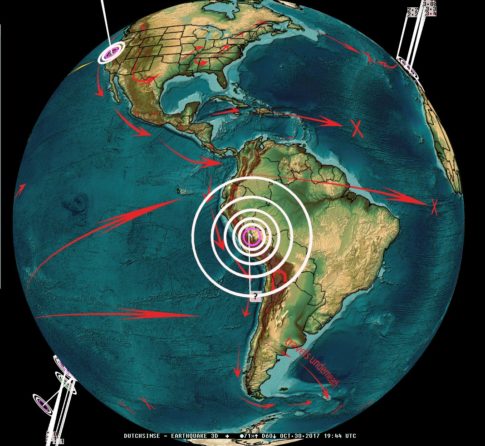 Yet another mistake earthquake striking with the exact magnitude expected, and in a location where we issued a warning to watch for.  This is getting to be too frequent to believe it is just chance or coincidence.  This time a huge M8.4 “mistake”.

Hmm, this is very strange indeed.

Not only did we warn the Pacific, but we warned the area on the opposite side of the plate from Indonesia, where the deep earthquake occurred several days ago.

This graphic below shows the deep earthquake location (M6.7) in Indonesia, and shows where the Russian GSRC agency is reporting the M8.4 across the plate in Peru.  Virtually the same latitude, as we were expecting.

This past week we issued a warning for the EAST Pacific in the corresponding location PARALLEL to the deep event in the West Pacific.

As you can see in the above graphic, the parallel location of the deep M6.7 earthquake from this past week is Ecuador + Peru, and both earthquakes happening very close to 7 degrees South Latitude.

People are telling me this was a “mistake”.  This would make the 28th mistake this year that coincides with our earthquake forecasts directly down to the magnitude and in the location.

If it is a mistake, then I can forecast MISTAKES on top of earthquakes, military tests, mine collapses, and sonic booms too!

If I can forecast “mistakes”, tests, collapses, and booms, then I need a job working for a consulting company immediately, with a salary in the millions — because I’d be the only human on the planet capable of forecasting mistakes of other people, or computers.

Here are screenshots of the information from the GSRC: 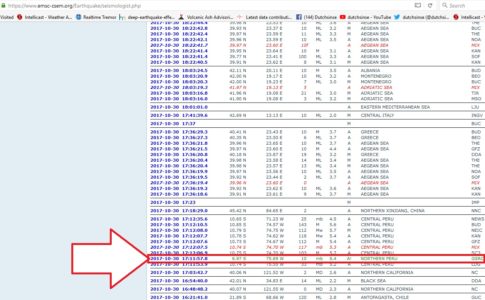