Update: WikiLeaks’ founder Julian Assange has a question for Twitter…

However, explicit calls for my (and Snowden’s) assassination are just fine:https://t.co/LankUBdLks

… then there is this…

Twitter banned Roger Stone after he used some foul language & verbally attacked a CNN anchor. But this genius is still around. Weird. pic.twitter.com/A0InFdwIfx

1. What is Twitter’s standard for suspending an account? Press attention? Milo and Roger Stone have had their accounts permanently suspended

2. But there are obviously millions of problematic tweets from as many accounts every year, why aren’t they permanently banned?

4. And they’re not just conservatives, I’ve gotten crazy hate filled tweets from liberals who aren’t bots and who are popular.

5. I guess my point is, Twitter’s process seems totally arbitrary and based on press attention. I know that’s obvious to some….

It appears that Mr. Dorsey’s reply over what it takes to be banned from twitter will be eagerly awaited from pundits on both the right and the left.

As we detailed earlier, after blasting CNN anchor Don Lemon and a handful of other employees at the “fake news” network in an obscenity filled rant, longtime conservative provocateur Roger Stone has been banned from Twitter in another example of a Silicon Valley media company selectively enforcing its code of conduct.

Stone launched into his rant late Friday, blasting CNN journalists for reporting that special counsel Robert Mueller has issued indictments in his probe into possible collusion between the Trump campaign and Russia, and that arrests could be made as soon as Monday. 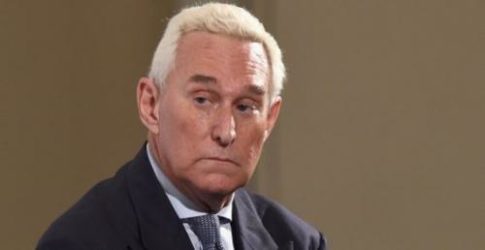 The Stone ban is the latest example of Twitter’s nanny state tendencies as the company positions itself as the final arbiter of what is and isn’t acceptable speech in contemporary American discourse – a position that increasingly involves persecuting conservative voices while people with more mainstream political ideologies are left to say whatever they please, more or less…

….As the Daily Caller so eloquently put it…

But a few CNN anchors are razzed and suddenly that means “threatened” and President Trump loyalist Roger Stone is out on his ass. Twitter officially suspended him Saturday. Some outlets like BuzzFeed and The Hollywood Reporter are saying the ban is for life.

Here’s a screenshot of all of Stone’s tweets, courtesy of Deadline Hollywood (because his account has been deleted, the tweets are no longer embeddable). 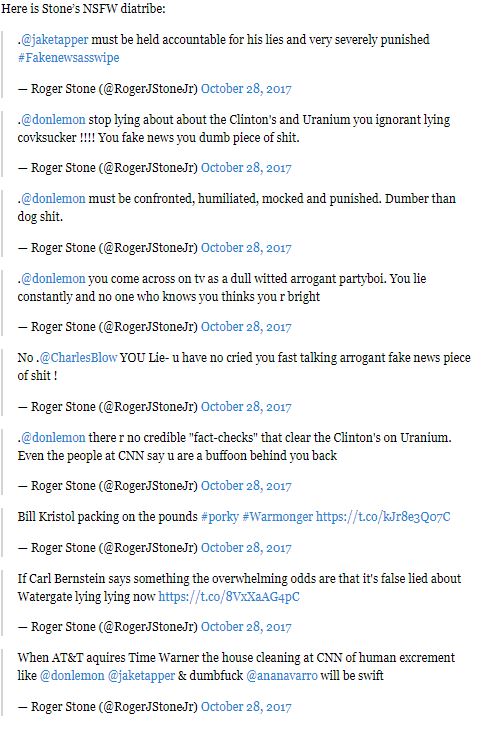 …and by the looks of it, it appears that none other than Keith Olbermann, the self-styled leader of “the resistance”, was responsible for reporting Stone’s tweets, triggering the ban…

Hey @jack, how is @RogerJStoneJr’s account not suspended after this public, homophobic attack? pic.twitter.com/B3HbqvLcBg

Unsurprisingly, the longtime conservative provocateur wasn’t thrilled to hear about the ban. Stone has long been the subject of vitriolic attacks and threats levied by leftists. As he told Politico…

“I have been inundated on Twitter with death threats, threats to kill my wife, my family, my children and even my dogs yet Twitter seems unconcerned with these bloggers.”

Of course, this type of censorship is hardly unique to Twitter.

USA Today opinion columnist James Bovard revealed in an op-ed published Friday that Facebook censored him after a photo he posted of a violent FBI raid “incorrectly” triggered the site’s automated censorship tools.

Facebook CEO Mark Zuckerberg declared last month that the company “will do our part to defend against nation states attempting to spread misinformation.” But, as Bovard pointed out, Facebook is effectively sowing disinformation by bowing to pressure from foreign regimes and censoring atrocities such as ethnic cleansing in Myanmar.

Because of this, the world’s largest social media company is probably censoring far more information than people realize.

Stone told Politico that he was told his suspension would be for “three hours and 22 minutes”, not a permanent ban. However, his account has yet to be restored.

However, Buzzfeed’s David Mack claims it is permanent.

Stone is not taking this repression of his freedom of speech lying down. As TheWarp.com reports, Stone said he will sue Twitter in response to the company banning him from the platform.

“I have retained one of the best telecommunications lawyers in the country and will be bringing a legal action against Twitter over The suspension of my account,” he told TheWrap.

“The battle for free speech has just begun.’

Stone would not publicly name the attorney until he signed a retainer agreement, which he said he expected to do Monday.