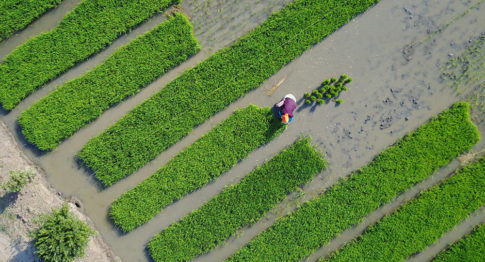 – Chinese Scientists Just Figured Out a Way to Feed More Than 200 Million People:

Scientists at the Qingdao Saline-Alkali Tolerant Rice Research And Development Center in Qingdao, China have figured out a way to grow high-yield rice in salt water, Sputnik China reports.

The new saltwater-tolerant strain of rice is actually a tried and tested strain; now, however, scientists have been able to increase its yield nearly threefold, to 4.5 metric tons per hectare. Yuan Longping, China’s top authority on hybrid rice, told Chinese media that cultivation of the new hybrid rice would be able to feed over 200 million people.

The new rice has already gone on sale, but remains a novelty item, its price remains nearly eight times higher than that of ordinary rice (50 yuan, or $7.55 US, per kg). Nevertheless, over a thousand people have pre-ordered the intriguing ‘sea rice’, and Yuan Ce Biological Technology, the Qindao-based startup partnering with Yuan’s research team, expects sales revenue of 10 million yuan ($1.5 million) by the end of the year.

Scientists say the new rice has health benefits, too, since the strain’s tough nature allows it to resist certain diseases, bugs and vermin, hence reducing the need for pesticide use.

Na Zhongyuan, director of the Yunnan Institute of Ecological Agriculture, said that it is not possible to officially name the variety of ‘sea rice’ just yet, although it has been branded “Yuan Mi,” in honor of the project’s chief scientist.

“The average salt content of sea water is 4%; the salinity of coastal water is at least 2%,” Na explained. “Meanwhile, the new strain of rice was experimentally grown in waters with a salinity content of 6%, in an area where fresh water mixes with sea water. The salinity content in such areas is usually a little more than 1%. To create areas with 6% salinity will require human participation, and I’m afraid there are very few areas like this.”

The scientist says more research will be required on the cultivation of rice in waters with a high salinity content, or in pure sea water. Other pressing issues that China must first deal with are the availability of inland water resources, and the pollution of those resources. Nevertheless, Na stressed that “the emergence of a new type of rice – this so-called ‘sea rice’, is great news.”

According to the South China Morning Post, the research breakthrough is highly significant, since it effectively boosts China’s potential rice production capability by nearly 20%. At the moment, the country has about one million square km of ‘waste land’, where rice plants have a difficult time growing due to high salinity and alkalinity levels in the soil.

China’s mass experimentation with salt water-grown rice began in the 1970s, amid concerns about the explosive population growth the country was experiencing at the time. Following decades of experimentation, cross-breeding, genetic screening, and trait selection, agricultural scientists have been able to create salinity-resistant strains of rice, and to increase their yield.

Scientists say they are only at the start of the path; as more and more salt water rice is produced, economies of scale will kick in, and prices will fall.