Translated: Trump suggests that there should be no constraint at all, not even the fiscally conservative pretense of the debt ceiling law, over how much debt the government can pile on the backs of future generations of Americans. If Obama can add $10 trillion, we are sure Trump can do “better.”

If you are wondering what is dragging the dollar down to 32-month lows, perhaps you should add this to the calculus… 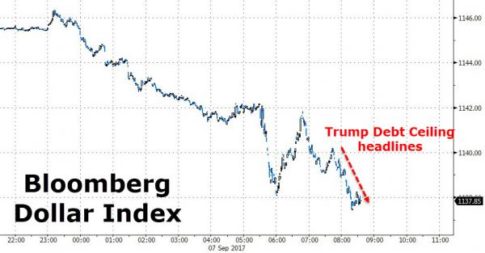 Politico reports that President Donald Trump suggested to congressional leaders on Wednesday morning that votes to raise the debt ceiling could be done away with altogether, according to three people familiar with the conversation.

In a meeting with GOP and Democratic leaders, in which Trump sided with the Democrats on a fiscal deal to raise the debt ceiling, the president said he believes the votes are unproductive, those people said.

He said conversations should happen over the next three months, according to people in the room.

President Trump has now added his thoughts, telling reporters “we have great respect for the sanctity of the debt ceiling,” as he meets with Emir of Kuwait. “There are a lot of good reasons” to get rid of debt ceiling altogether, Trump says, adding that he discussed it with congressional leaders yesterday, and adding that “there will never be a problem” on the debt ceiling.

“We have a great respect for the sanctity of the debt ceiling,” Pres. Trump says https://t.co/6rXb7Hihyo pic.twitter.com/WGf65Jbqxr

The Dems, are of course, delighted by Trump’s shocking U-turn:

Schumer said such a move could not be accomplished now, but indicated he would talk to his caucus about considering structural changes to the debt limit in December, a conversation Trump supported.

House Minority Leader Nancy Pelosi (D-Calif.) also appeared interested in the deal but was noncommittal. The debt ceiling is a key leverage point for members of the minority, particularly because it can be filibustered in the Senate and require 60 votes.

As WaPo confirms, President Trump and Senate Minority Leader Chuck Schumer have agreed to pursue a deal that would permanently remove the requirement that Congress repeatedly raise the debt ceiling, three people familiar with the decision said.

Trump and Schumer discussed the idea Wednesday during an Oval Office meeting. Schumer, Trump, and House Minority Leader Nancy Pelosi (D.–Calif.) agreed to work together over the next several months to see if they can finalize a plan, which would need to be approved by Congress.

One of the people familiar described it as a “gentlemen’s agreement.”

We suspect Reps won’t be so happy…

Conservatives are unhappy that the White House and congressional leaders have agreed to raise the debt ceiling without spending cuts.

Translated: Trump suggests that there should be no constraint at all, not even the fiscally conservative pretense of the debt ceiling law, over how much debt the government can pile on the backs of future generations of Americans. If Obama can add $10 trillion, we are sure Trump can do “better.”